All About Climate Zones

Do you know the two parameters behind hygrothermal regions and climate zones?

One of the fundamental principles of building science is that buildings must be suited to their climate. When they’re not, problems can ensue. Maybe it’s just that they’re not as efficient as they should be. Maybe it’s worse. Put plastic between the drywall and framing of your exterior walls in Ottawa, and it can help control vapor drive from the interior air and its associated moisture problems (rare in all but except in extremely cold climates). Put that plastic in the same place in Georgia, and you’re going to rot the walls.

The first thing to know about climate zones is that we divide them up based on two parameters: temperature and moisture. The map at the top of this article, from Building Science Corporation, is one that seems to be in a lot of the curricula for home energy rater and other energy auditor classes. The fancy word for this type of division is hygrothermal, and Building Science Corp. has a nice interactive map of hygrothermal regions.

The map above divides all of North America into broad regions based on temperature and then humidity. My friend and former colleague Mike Barcik likes to say that the color of the zone shows what color your skin turns in winter.

The International Code Council has a more fine-grained approach to climate zones,â€  as shown below in the map of the US from the International Energy Conservation Code (IECC). Each zone has a number, starting with 1 for the hottest US climate, the southernmost tip of Florida, and going up to 8, the coldest parts in Alaska. 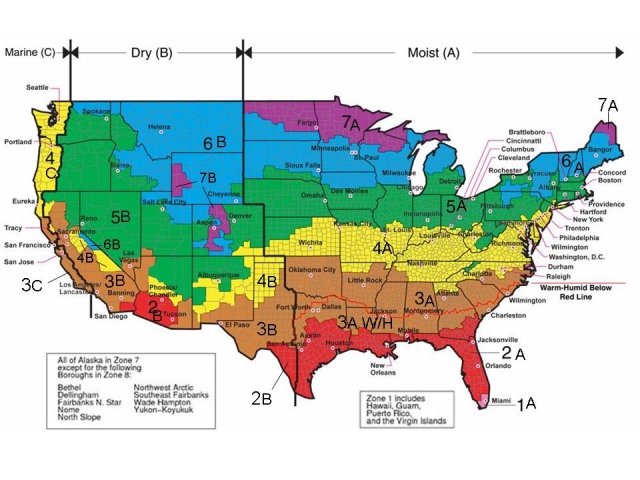 The number of each zone tells you how warm or cold it is. I wrote above that temperature is the parameter, but that’s not a full description, of course. It’s not just how cold or how hot the place gets. It’s based on accumulated temperature calculations called degree days. Basically, degree days combine the amount of time and the temperature difference below some base temperature.

An Overview of the 2012 Energy Code

Efficiency Programs Struggle to Stay Ahead of Energy Codes

Notice that the IECC map also shows how moisture impacts the climate zones. Generally, it’s moist to the east, dry to the west, and marine along the West Coast. I remember driving across Texas, from west to east, in the summer of ’88 and feeling the humidity hit us when we crossed that black line. At the time I had no idea what that big black line was when we drove over it, but now it’s clear.

People have known about that line since the 19th century, as a matter of fact. It lies pretty close to the 100th meridian of longitude, and divides the part of the US that gets enough rain to farm without irrigation from the dry side that requires irrigation.

The three main moisture divisions are:

Actually, there’s a 4th moisture division shown on the map. Notice the red line going horizontally across the Southeast. It divides the eastern, moist side of the US into moist and moister, basically. This division isn’t based on precipitation, though. It’s based on humidity. A climate zone is called warm-humid if the wet bulb temperature is:

It’s all in the IECC

If you don’t know the exact definitions, it can be a bit confusing. Now you’ve got my summary here, but you can always get yourself a copy of the IECC as well. Most states are still on the 2009 version. Maryland and Illinois have moved up to the tougher 2012 already. The climate zone definitions are the same in both versions. In addition to the basic definitions above, the IECC also tells you county-by-county what the local climate zone is.

Now get out there and design, build, and renovate in ways that work for your climate.

â€  The International Code Council is based in the US and, like the World Series, has little foothold outside our borders. Although the IECC climate zone map here shows only the U.S., you can use the definitions of the climate zones for any location in the world.

For example, most of Canada is in climate zone 750. Just kidding. Most Canadians probably live in climate zones 5 and 6. By looking up heating degree days on degreedays.net, I found the following: Climate Zone 4C – Vancouver; CZ 5A – Toronto; CZ 6A – Ottawa, Montreal, Quebec; CZ 7B – Calgary. (Thanks to commenter Christopher Solar of Ottawa for straightening me out on this.)