Coping With High Humidity and Mold

In southern Vermont, a tight, well-insulated house is showing isolated areas of mold

Moses Draper and his family are spending their first summer in their new house in southern Vermont. The 1,200-square-foot house is well insulated and very tight, so the summer should be a pleasant experience for the Drapers. Except that it’s not turning out that way.

“Most of the summer, we’ve been experiencing high humidity inside the house,” Draper writes in a Q&A post. “Our small, inexpensive thermostat/moisture meter, is usually at 99%. We have started to notice a couple isolated items with mold on them and I’m wondering what to do about it.”

The house, constructed on a concrete slab, has double-stud walls 12 inches thick that are insulated with cellulose. The vented roof has 18 inches of insulation, and a blower door test measured airtightness at 0.39 ach50. Draper has installed two Lunos vents in the walls, which operate on high except when windows are open at night. Draper says that he is “religious” about running his range hood and bathroom exhaust fans. In other words, much about the house seems right.

Rules of Thumb for Ductless Minisplits

Yet mold is showing up in what Draper describes as “isolated pockets” — shoes in the entrance closet, wooden toys, on a refrigerator magnet. It’s possible the family imported some mold from its previous dwelling (a yurt).

“Do we need to increase our whole house ventilation, or is this just endemic to summers in a humid climate?” Draper asks. “Is something like a dehumidifier the best response?”

That’s the question for this Q&A Spotlight.

Get a new hygrometer

It’s very unlikely that either the indoor relative humidity or the moisture content of any wood in the house is actually 99%, says GBA editor Martin Holladay.

During the summer, indoor relative humidity in a house without air conditioning could easily be 60%. If it got to 70%, that would be high. A moisture content of between 20% and 28% for wood would be high — should it climb to more than 28%, that would be “very worrisome.”

So the first thing Draper should do is get one or more hydrometers to measure the actual indoor relative humidity.

Unless the weather is hot and humid, running ventilation fans should reduce indoor relative humidity, Holladay adds. When the weather does turn sultry, Draper should close the windows, reduce the amount of time that ventilation fans run, and run an air conditioner or dehumidifier (or both).

The $10 Acu-Rite hygrometer that Draper has been using is “pretty good” in the middle of its range, but not so at humidity extremes, writes Dana Dorsett. The units also seem to suffer permanent damage or miscalibration when consistently exposed to high humidity.

“If it’s been reading 99% for awhile, it’s probably toast,” Dorsett says. “The nighttime ventilation periods should show readings much lower than that, except during the most humid of days. Buy a fresh $10 Acu-Rite and compare the reading side-by-side, in some room other than a bathroom or kitchen (where humidity spikes are common.)”

The downside of living without AC

The family opens the windows at night because it’s the only way of staying cool. Draper would prefer not to install an air conditioner.

If you want to lower the relatively humidity indoors, Holladay replies, it’s essential that you keep the windows closed. And once you do that, you’re probably going to feel hot. Under those conditions, most people resort to an AC unit.

“If you like to keep your windows open during hot, humid weather, your salt shakers won’t work, and your envelope flaps will start to stick together before you lick them,” Holladay says. “That’s the way I live, but it’s not for everybody. If your indoor relative humidity is high under these circumstances, don’t be surprised.”

Draper may be resisting an air conditioner, but he says he is planning on getting a dehumidifier. If that’s the case, says Peter Engle, he might want to rethink his resistance to AC.

“If you are willing to pay the energy penalty of running a dehumidifier, you should think twice about running AC instead,” Engle says. “Dehumidifiers are pretty much the same thing, but they reject their heat back into the room instead of outside. If you close the windows and run a dehumidifier during the day, it’s going to get pretty warm in there.”

He adds that a small minisplit heat pump would heat, cool, and dehumidify the house with about the same amount of energy that a portable dehumidifier would use. When outdoor dew points are below 65°, go ahead and open the windows, he adds. When dew points are higher, run the minisplit night and day.

Walter Ahlgrim agrees that running a dehumidifier will lower the relative humidity, but it will make the inside of the house warmer. “You will not be comfortable,” he says.

Bruce Eaton reports similar problems in his house just north of Boston, Massachusetts. Eaton’s house is the same size, and is also well insulated with a very low rate of air leakage. He’s using a Mitsubishi dual-zone minisplit with two heads, one in the open downstairs and another in the stairway heading upstairs.

Eaton has noticed relative humidity of between 60% and 70%, but it can be lowered to the 50% range by running the minisplit on the dehumidify setting. Turning the heat-recovery ventilator to the “away” setting makes the humidity fall more rapidly. Eaton hasn’t noticed any mold.

“Our minisplit head in the upstairs stairwell unfortunately appears to be in the wrong spot,” he says. “While the upstairs is cooler than outside, we’re seeing around a 5°F temperature difference between the bedrooms and stairway and the downstairs (follow the dog). We’re using fans to help cool the bedrooms.”

When the temperature falls into the mid 60s, Eaton has been opening the windows, which cools the house off faster than does AC. In the morning, he closes the windows.

Dorsett suggests that Eaton set the minisplit fan to the lowest or next lowest setting when the minisplit is in the normal cooling mode. “At lower fan cfm, the temperature of coil is cooler, removing more moisture than it does at high fan setting,” Dorsett says. “This won’t be a total solution, but it helps.”

Here’s what GBA Technical Director Peter Yost had to add:

It’s interesting to compare sensible and latent loads for various locations (see the chart below). It’s not surprising how dominant the latent load is for New Orleans and Miami; but Boston and Minneapolis? 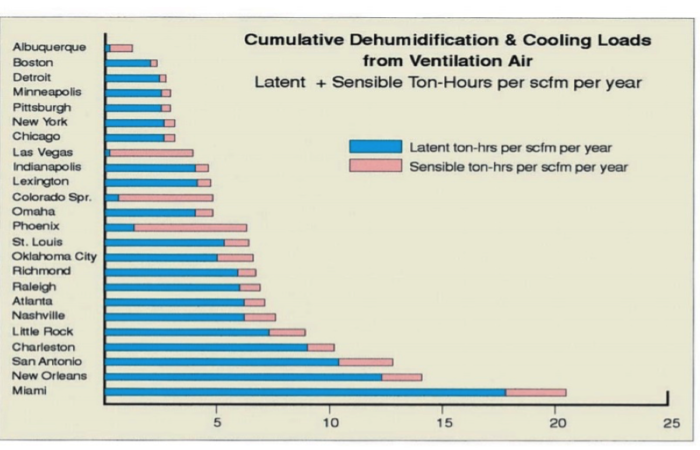 We are lucky that high-performance minisplit heat pumps with sensible heat ratios (the portion of the total load dedicated to sensible heat removal) of less than 70% are available. It’s important to get this information so that a respectable portion of your AC capacity is geared to latent removal. Coil configuration plays a role in this, of course, but also air speed on the coils makes a big difference. If you slow down the air, you increase the amount of time the air spends in the coils and this increases latent removal.

In our house (Climate Zone 6A, Brattleboro, Vermont), we can get away with nighttime cooling until we get three consecutive days and nights of hot, humid weather. We use both a whole-house exhaust fan as well as ceiling fans. But this week, for example, the two or three consecutive days with air temperatures in the mid-70s overnight and dew points just a degree or two below that, made it time for AC.

As Martin points out, it all comes down to what you are willing to tolerate. We sleep downstairs with one AC unit when conditions defeat our outside-air approach. You could say, “What a ton of work that is to do when central AC or minisplits would work well.” But the really nasty hot humid stretches are short and infrequent enough that it just does not seem worth the expense. Especially when — for better or  worse — our heating is solely by an oil boiler with hydronic distribution.

If you have central forced-air, it’s not a bad idea to consider whole-house dehumidification. For many locations, the latent load dwarfs the sensible load and the latent load may need to be targeted for real comfort. This is particularly true for high-performance homes in climates where the shoulder seasons — times when you don’t need active space heating or cooling — are longer, increasing the times when you need dehumidification without cooling.

Finally, getting a decent hygrometer is a good idea. For more, read this blog.