The Framers Botched Their Job on ZIP Sheathing

The Zip System R-sheathing that 88Clayton has chosen for his house is structural OSB sheathing with a water- and air-resistive coating applied to one side and a continuous layer of insulation applied to the other. When installed with Zip Tape, the sheathing provides the WRB for the walls and becomes an integral part of the house’s air barrier and thermal envelope.

But when most of the nails attaching the sheathing to the house have been overdriven, some disappearing into the layer of foam insulation bonded to the back of the sheathing, Clayton wonders just how effective any of this is going to be.

“The framers building my house severely over-drove 90% of my sheathing nails on the Zip-R,” Clayton says in a Q&A post. “It’s into the foam in many cases. Thousands of nails. Not to mention, their tape job is horrendous, with improper lapping.”

What to do next? Clayton isn’t sure whether it’s feasible to tape over every single one of the nail holes. Should he cover the ZIP sheathing with a layer of housewrap? Or, is there some other way of fixing this mess?

That’s where we start this Q&A Spotlight.

“It may sound daunting,” he says, “but Liquid Flash may be an option here. It would be faster than taping to dab each hole with Liquid Flash and a putty knife. Same for fixing problematic tape joints or fish mouthing.”

Like Malcolm Taylor and other GBA readers, Spenceday raises another issue: if the nails are that badly overdriven, has the shear strength of the sheathing been compromised? What are the structural consequences of this sloppy work?

Clayton may have to renail some of the sheathing to make sure it’s attached properly and provides the structural strength it’s designed to add to the frame of the house.

GBA Editor Martin Holladay points to a technical document from Huber that may help. In it, the company makes two key points:

Clayton has been in touch with the manufacturer, and the company has sent a rep to the house for an inspection.

“One of the area reps, Brian, has been great,” Clayton writes. “He met me out on the job site and we did a thorough walk-around as I pointed issues out to him. He also noticed some things I had not seen and offered ideas on solutions.”

One thing they agree on is that the nail spacing is, in Clayton’s words, “pretty atrocious.” Fasteners are sometimes no more than an inch or two apart in clusters of five or six overdriven nails.

“He agreed with me on the severity and thought it would be an airtightness issue as well as exposing the raw OSB to moisture,” Clayton continues. “He recommends using longer strips of tape to cover rows of holes, rather than little pieces. He also suggested Zip Liquid Flash as an alternative to tape but said it would take longer.”

Among the problems they’ve identified in addition to overdriven nails are:

“This has to be one of the worst framing crews ever,” Clayton says. “I have a custom builder of some notoriety in my area. He’s built dozens of homes in a very respectable neighborhood full of custom upscale homes. I expected much better than this. They don’t really supervise the crews. Just unleash them for days at a time.”

Another Huber rep who Clayton spoke with on the phone suggested that housewrap might be a good solution.

Do we expect framers to do too much?

In broadening the discussion, Taylor suggests that builders may be expecting too much from framing crews, that some of the details of successfully completing a building enclosure are beyond their interests or skills.

“I wonder if there isn’t a mismatch right now in what we are expecting framing crews to do?” Taylor asks. “It always seemed problematic to me that we left installing the windows and doors to framers. It makes sense from a sequencing perspective, but it’s not a great skill match. Now we are asking them to tape sheathing and apply membranes to rough openings.”

Framers like to frame buildings, he adds, but he’s never met one who expressed much interest in water-resistive barriers, flashing, or air-sealing.

“That’s not an excuse for doing shoddy work,” he says, “but I don’t see any good from loading more unrelated tasks onto framers that don’t have much in common with their primary skills.”

Point taken, replies Zephyr7, but framers certainly should be able to hang sheathing and know enough not to overdrive nails. And in this case, the builder may need to educate his project manager.

“His project manager, who has failed to sufficiently supervise the framing crew, had ‘never heard of rolling the tape’ and ‘never heard of a J-roller,'” Clayton says. “Apparently he’s never looked at Zip tape before, which has ‘ROLL THE TAPE’ printed all over it.”

Next up in the building schedule, after the sheathing has been repaired, is window installation. Clayton has already lined up a meeting with the builder to ask for different window installers.

GBA’s technical director, Peter Yost, had this to say:

First, nail guns can be dangerous. Not too long after I started at the NAHB Research Center (now the Home Innovation Research Labs), Hurricane Andrew struck south Florida. That was in 1992. Houses in south Florida built by Habitat for Humanity hit the national news because they consistently kept their roofs on during the storm when most others did not. Engineers from the Research Center conducted HUD-sponsored damage assessments in south Florida and I ended up working on construction waste management for Homestead Habitat. I saw the damage first-hand.

One of the main reasons that Habitat-built houses kept their roofs is that volunteers nailed on roof and wall sheathing by hand, with nary an overdriven fastener or “shiner” (a fastener that missed the framing).

This is not just a problem with ZIP sheathing. Every type of structural sheathing develops its full rated shear resistance only when fasteners are driven flush, in accordance with the manufacturer’s instructions, standardized testing, and the building code:

“IBC 2304.9.2 Sheathing fasteners: Sheathing nails or other approved sheathing connectors shall be driven so that their head or crown is flush with the surface of the sheathing.”

How much does overdriving affect shear capacity? Below is a chart from the Structural Building Component Association (SBCA) that addresses that question. 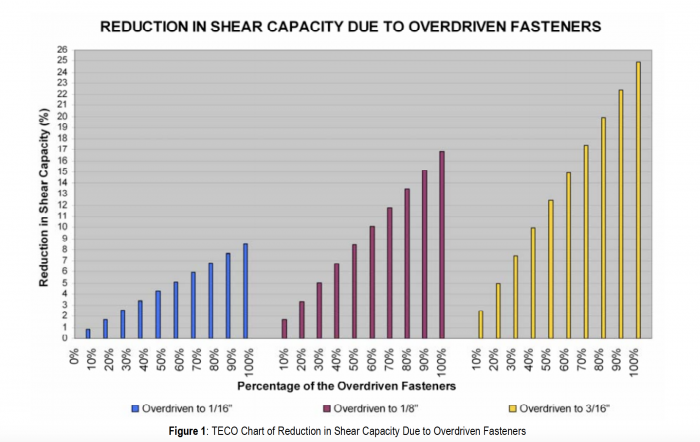 Is it a good thing to combine functions into one system of related components the way ZIP can be a water-resistive barrier and part of the home’s air and thermal barriers? You bet it is, but it comes at the price of workmanship potentially trashing all three elements of performance.

The problem is not with the components or the system. The problem is with job site awareness of building science and high performance. And that is exactly why here in little old Brattleboro, Vermont, our local Sustainable Energy Outreach Network is developing a high-performance building certification within the National Center for Education and Research (NCCER) Core Curriculum for Level 1 Carpentry. Our local builders have been demanding that everyone who gets hired have an awareness of what high-performance building means. That means that if your exterior sheathing is structural, your water-resistive barrier, and an air barrier, you get triple points for flush fasteners!