Lessons Learned on a Living Roof

Even drought tolerant plants need water to get established.

We have a wee living roof on our home. After a couple of false starts, it’s looking quite winsome. Since it has posed a number of challenges, I thought I’d share our experience. Mistakes, after all, are more instructive (and entertaining) than successes.

Not well, actually. I was excited about the project—not only were we going to do something new; the result, a wildflower meadow, was going to be on view from our master bedroom. 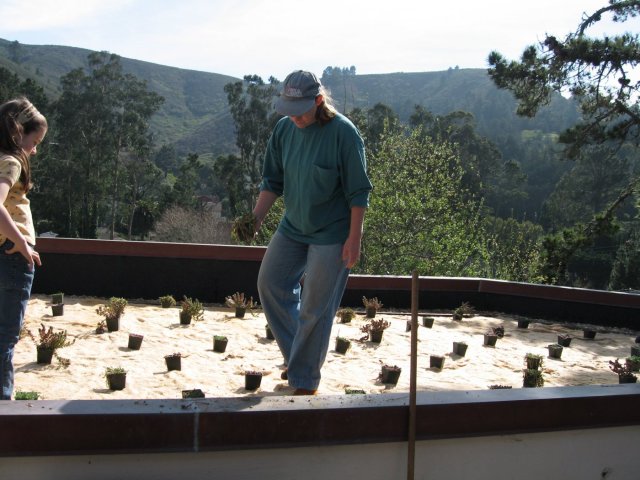 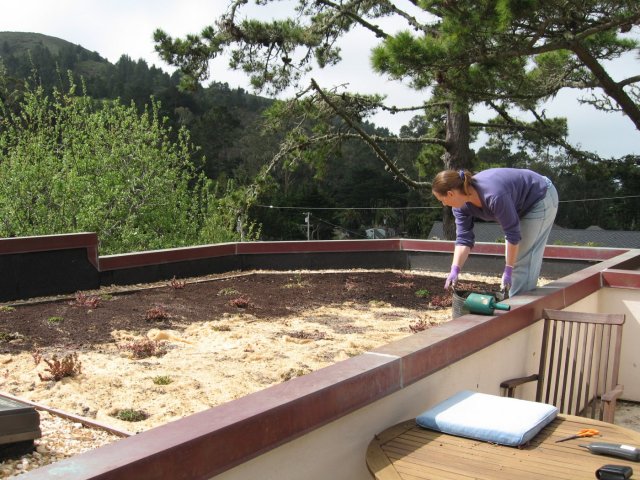 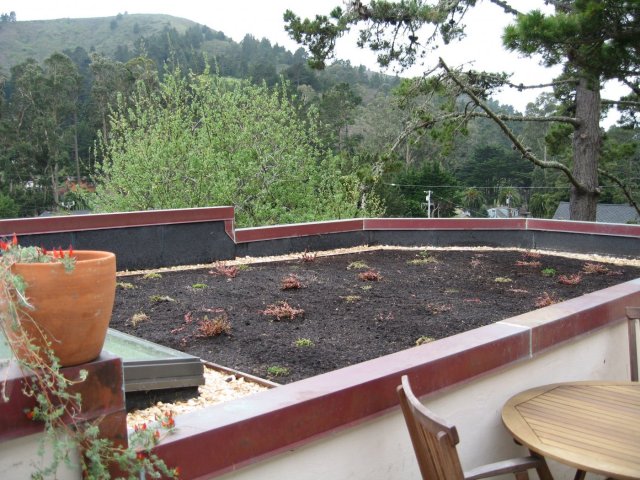 But when it came time to build it, our general contractor, Bob Vetter of Pacific Circle Construction, informed us that the bids were astronomical—about six times what it would cost us to put on a conventional roof.

Getting the cost down

I relayed this news to Bill Wilson and Apryl Owens, our living roof design team, and they were hugely disappointed too. So we all put on our thinking caps. Bob consulted with several roofing subs and advised us to consider a conventional 5-ply built-up roof (BUR) as the base layer. This was beefier than the normal 3-ply BUR, but because we really didn’t want to have any leaks, we felt that the extra measure of protection was a worthwhile investment, even though the living roof protects the BUR from its worst enemies, the sun and puncture risks.

Bill and Apryl determined that they could build up a custom assembly of filter fabric, drainage medium, and engineered soil mix. This would eliminate the proprietary, off-the-shelf living roof system that might have been cost-competitive for a large commercial installation but was far beyond our budget. They also decided to install it themselves, lacking qualified installers for their custom system. And they managed to scrounge up a roll-end of the critical component, the drainage medium, from a larger job. It’s something like bubble wrap, designed to retain a small amount of moisture at the bottom of the assembly just long enough for the plants to absorb it.

All that brought the price down to roughly double what a garden-variety (yes, pun intended—sorry, I couldn’t help myself!) flat roof would cost. We were getting not just a roof, but a roof with an exceptionally long life expectancy and a whole new annex to our garden (complete with irrigation system), so we deemed this a good value.

Construction went mostly without a hitch—that is, if you don’t count the fact that our roofing sub ended up in jail before finishing our job. Frankly, we were glad because, before that happened, he thoroughly creeped us all out. But that really has nothing to do with the living roof, so I’ll skip the gory details.

He did complete the 5-ply part of the job, fortunately. The rest of the roof (standing-seam metal, which we also quite like) was finished up by an off-duty firefighter who moonlighted doing sheet metal work. He did a fine job, although he did forget to button down a skylight, which we only learned upon finding it on the back porch one morning, after a particularly gusty storm. Our first clue? A puzzling patch of water on the stairs. Amazingly, the skylight suffered only a minor dent on one corner.

Bill and Apryl installed the living roof assembly and drip system themselves, as planned, and did a beautiful job.

It was a while after the whole project was done before I got around to planting—it’s been about two years now. I purchased a bunch of sedum (four varieties) from Rana Creek, now famous for the living roof on the new LEED Platinum California Academy of Sciences, and planted them with help from my neighbor Dawn and our kids. Then I seeded with California native annual and perennial wildflowers and grasses from Larner Seeds. Then I watered, then I waited.

As it happens, I didn’t water enough, and I waited too long.

We had planned to install an automatic timer on the irrigation system but hadn’t gotten around to doing it, so I had to activate the system manually. In general, my garden policy is one of benign neglect. In this climate, if you’re not drought tolerant, you will wither and die pretty quickly if you’re in my garden. Even though the roof garden was right under my nose, I’m sorry to say that it was no exception.

I can now attest that sedum is, as billed, extremely drought-tolerant, albeit slow-growing. I don’t think I lost a single one. All the wildflowers and grasses I’d chosen were also drought tolerant—but they did require moisture to germinate, and that’s the part I muffed. I tried, mind you. I’m just a lousy plant parent. (This is why I don’t have many plants in pots: They really must have access to a scintilla of moisture in the ground if they’re to have a prayer of surviving.)

After several months of good intentions and seriously flawed follow-through, I reseeded. This time I was a bit better about the watering, and got some wildflowers going. Not a stunning crop, but enough to cheer me considerably and alleviate my sense of shameful negligence.

I should mention that not all of this was my fault. There was a conspiracy to thwart me on the part of my irrigation system. It was finicky. In fact, for a long time I thought it was broken. After the first planting, I succeeded in getting it to deliver water only a couple of times, then the valve—mysteriously—failed to produce water. So I resorted to hose-watering. This is what really foiled me. If maintenance is not easy, I confess to being easily deterred; there are too many other maintenance tasks that demand my attention but don’t represent such a challenge—laundry, for instance. I can pretty much do laundry in my sleep (which is a good thing).

I talked to Bill about the @#$#% valve, and he suggested that I take a closer look at it; perhaps it just needed a tweak. I tweaked, with no luck, and another few months went by with me watering sporadically. Then one day when I could no longer remember all the details of my challenges with the @#$#% valve, I resolved to have another look. So look I did, and tinker, and lo and behold, the valve cooperated—and has ever since.

Having conquered the watering challenge (lame as it was), I seeded for the third time, and watered somewhat diligently. I also enlisted the help of my gardener, who up until that time had no responsibility for the roof. I’m quite prepared to admit that his attention is probably what turned the tide. And so we now have a roof full of vibrant color, well into its second spring. The grasses have been slower to start than the wildflowers, but they’re coming along nicely. I had a fair amount of lupine last summer, and I’m hoping we’ll get some repeats. My first batch of California poppies for the year bloomed a week or so ago, and we have a couple of varieties I don’t remember from last year.

All in all, I’m quite pleased with the view.