Now that I have installed several of these small, efficient water heaters in my house, I am an evangelical convert to the technology

A couple of years ago, I was standing at my kitchen sink, idly waiting the minute or so for hot water, noticing my poor parched backyard. Central Texas was (and still is) in the death grip of a prolonged, severe drought. Our lakes are in really bad shape, and we are under very tight water restrictions.

Then suddenly, I had a mini epiphany: I’m wasting a lot of valuable water while I wait for hot water.

I’m certainly not the first to have this realization, but it just killed me to be wasting all that water. I did a little mental math: 2.5 gallons probably 10 times a day = 25 gallons a day, which = 750 gallons a month. At $4/1000 gallons, that’s a minuscule financial hit — but hey, that’s just about a yard watering. It got me to thinking.

We’ve tried a lot of options

I’ve been tankless for years. My house of 32 years does not have access to natural gas. Consequently, we originally had an electric tank-style water heater. Back then, I didn’t know much about anything, but I knew that this was the worst way to make hot water. So, I did a little research, and bought a whole-house electric tankless water heater. All in all, it was not a great experience.

All About Water Heaters

Get Rid of Your Gas Water Heater!

Are Tankless Water Heaters a Waste of Money?

First, the rumor about whole-house electric tankless being expensive was true. Besides the roughly $2,000 for the unit, we had to do a pretty massive upgrade to the electrical system. I don’t remember how much the work cost, but it was a lot.

Second, the rumor about them not working very well was also true. But, we plowed on. I may have been driven, to some degree, by the fact I was going to inherit the water heater closet for my cramped shop. Not a small thing, indeed.

We went through several models, and performance was always less than stellar. My family grew weary of my standard response to their complaints: “Hey, there are people in the world that don’t have any hot water.” This did not play well with teenagers (or wives). At the time of the incident above, we were actually using a propane-powered tankless system, fed from propane cylinders. True story. That heater provided much better performance, but it was definitely a bummer when the propane tank ran out during a shower! My family was always mad at me, but by now, it was way too late to give my tricked-out closet back to some water heater.

A light bulb goes off

We happen to own a little cottage near the lake that we rent out. It had a small 40-gallon water heater that always smelled like rotten eggs. A while back, when the water heater croaked, I did some research, and replaced it with a small (10”x8”x3”) electric tankless unit from Niagara called a Titan N-120. It’s made in America, got pretty good reviews, and was a piece of cake to install. The renter loves the extra space in the tiny kitchen, loves the instant hot water, and is happy to have the rotten eggs smell gone. 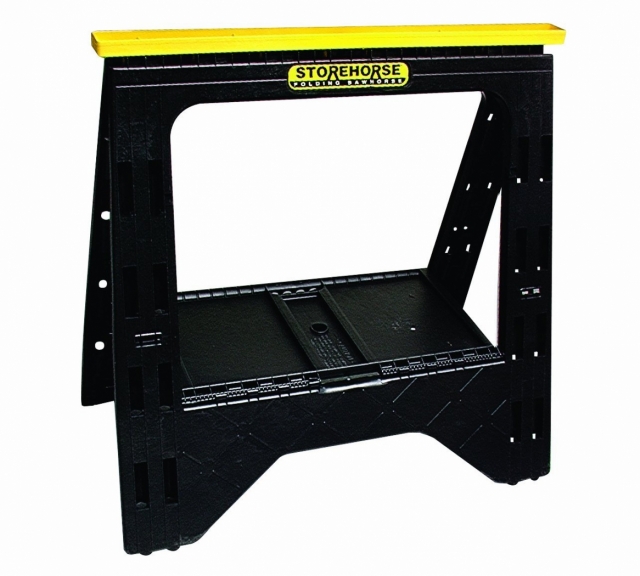 I am an inventor of sorts — at least that’s how I’ve made my living for the last 20 years. My most famous product was the original plastic folding sawhorse called StoreHorse. That was a long time ago, and they are now mostly cheap knockoffs. I don’t mean to cast myself as some prolific genius type, but my point is that, almost by definition, as an inventor, I’ve always had a certain lack of respect for conventional wisdom. You won’t get far in this business doing things the way they’ve always been done.

So now, back to me standing at my kitchen window watching the grass die while perfectly good water goes down the drain. It seems like I decided then and there to go on a campaign to place a POUET — a point-of-use electric tankless water heater — at every location where we need hot water.

The driver was not to save money on my water bill, nor was it to save money on my electric bill; it was to save water. Yes, I am well aware that my 750 gallons a month is the proverbial drop in the bucket (pun intended), but I just thought it would be a good thing, and that’s just the way I am.

Luckily, I am an extreme do-it-yourselfer. I did my own wiring and plumbing. It turns out that the work was really pretty easy.

I bought an assortment of seven POUETs; some from Craigslist, some from Amazon, and some from eBay. The size of the units ran the gamut.

At the small end of the gamut was a simple 110-volt, 2.4-kW, 20-amp Eemax unit that I installed in the downstairs half bath. With very little ability to raise the temperature, but with the included extreme flow restricting aerator, washing hands is all it needs to be: just OK.

In the middle of the gamut was a new Niagra Titan N120 that I bought off of eBay for about $220. At 220 volts, and drawing 54 amps, it took running a new 6/2 cable in a conduit outside the house. I installed the unit over the showerhead in the tub in the kids’ bathroom, and I hooked it up to the sink as well. The kids say it’s the best hot water they can remember ever having in this house. I painted the unit, because frankly it was pretty ugly. Maybe it’s still a bit ugly, but I’ve always been a “form follows function” kind of a guy.

At the furthest extreme in the gamut were two Titan units that I installed in series, again over the showerhead in the tub, in the master bathroom. The reason I installed two is that my wife likes to take scalding (and I really mean scalding) baths, while I take showers. Each of the Titans has four settings or buttons. When she takes a bath, she turns on all eight clicks. When I take a shower in the winter, I turn one unit completely off, and the other on about two or three clicks. In the summer, I only use one click, and I wish there was a way to use half of that.

An end to wasted water and wasted energy

Now, I am an evangelical POUET convert.

Currently, my son and I are remodeling his new older house, and we are using POUET water heaters for the house. One of my buddies, who has been in the biz for years, says I’m @#$%&ing crazy. “Have you ever stood outside and watched the meter spin when that thing is on?” he says. Well, I say that’s conventional wisdom talking. I say that it takes the same amount of energy whether you do it fast or slow. Physics is physics.

What’s more, a non-tankless (see, that’s convert talk) system suffers from all the familiar stuff like stand-by losses, cold pipes carrying hot water, hot water being left stranded, etc. But, it’s not just about savings; there is so much more to it, like:

For utilities, there are time-of-use issues

Now, there is one downside that I cannot address: “peak demand.” Power companies will probably not, um, … embrace this idea. They will see all those homes, all spiking the system with their morning showers, all at the same time. I don’t know, I’m not smart enough to know how bad that will be. But, I say, maybe it should be weighed against all those homes not wasting 10,000 gallons a year. Here and now, with the acute shortage of water, it might be a worthy tradeoff.

On a recent AIA home tour, I queried several of the designers and builders of touted “green” homes about POUET water heaters. They all wanted to discuss their state-of-the-art recirculation systems. To me, POUET is easier, cheaper, and more efficient.

After all these years of lamenting the lack of gas in my home to heat water, I would now choose POUET over some gas-fired system.

Someday, I think that POUET will be “conventional wisdom.” In the meantime, my yard is still parched.

Rick DuRapau is a regular guy who tends to see things a little differently. He lives in Austin, Texas, with his exceedingly patient wife of 37 years.