An insulation contractor has suggested a way to save money, but the homeowner worries about the added risks of moisture accumulation

Mapping out the roof assembly for a new house in Climate Zone 6B, Steve Mackay has settled on long I-joists insulated with a mix of closed-cell spray polyurethane foam and blown-in fiberglass. He doesn’t plan on venting the roof, and he wants to be certain his design will be problem free.

Here’s what it looks like: 14-inch I-joists with 5 inches of closed-cell foam sprayed on the underside of the roof desk. The balance of the insulation will be fiberglass (Mackay wants to use the BIBS system) with no interior vapor barrier. In all, he gets R-67 in the roof cavity, with R34 coming from the foam, and R-33 from the fiberglass.

Mackay has read an article on the topic by GBA’s Martin Holladay, and he’s confident the assembly will work. With an inside design temperature of 68°F and an outside design temperature of 22°F (an average of the three coldest months of the year) and a relative humidity of 35%, the inside surface of the spray foam will be about 45°F. That’s well above the dew point of the air and safe from the threat of condensation.

All About Vapor Diffusion

The assembly would be cheaper than Mackay’s original plan. But does this change his calculations on where the first condensing surface is? And with the change, does the risk of condensation inside the assembly go up?

That’s where we start this Q&A Spotlight.

Don’t reduce the thickness of the closed-cell layer

“So,” he writes, “for Climate Zone 6, my understanding is that you would still need 50% of your R-value to be in the ccSPF regardless of if the layer below is ocSPF or BIBS in order to comply with the code requirement in table R806.5.”

The reason that the open-cell foam doesn’t count as an “air impermeable” insulation for code purposes is a code provision specifying that any air impermeable insulation “shall be a Class II vapor retarder” in Climate Zones 5 and up.

Yes, but take in mind the rest of the language in that passage, adds Jon R: “…or shall have a Class II vapor retarder coating or covering in direct contact with the underside of the insulation.” Meaning, that a smart-retarder such as CertainTeed’s MemBrian would satisfy the requirement.

Jon R also suggests that reversing the order of the insulation–spray the open-cell foam first, then add a 2-inch layer of closed-cell foam to act as the vapor retarder–would allow the assembly to meet code.

Another option, he adds: 6 inches of recycled EPS with 2 inches of closed-cell foam, then the balance filled with fiberglass.

Reduce spray foam as much as possible

Add some rigid insulation and reduce the amount of foam you need, says Akos.

“If you don’t need the full 14-inch depth to support your span, you might be able to save a bit by going with cross purlins and some rigid insulation above,” he suggests.

If Mackay were to use 11 7/8-inch I-joists instead, he could add 2×3 purlins on edge with 2 1/2-inch-thick polyiso between them. Then, he could reduce the spray foam to about 3 inches.

“For lowest cost, it’s is best to design spray foam completely out,” he adds. “Go with a vented roof or unvented with exterior rigid insulation. Spray foam should be the last resort.”

Go ahead and vent the roof

Mackay, in fact, needs the full 14-inch I-joists because of the long roof spans. Given that’s the case, Dana Dorsett suggests that he include a 1 1/2-inch air gap under the sheathing then install 12 1/2 inches of half-pound open-cell foam.

That would yield about R-46 at center cavity, he says, but the assembly would still meet the IRC code minimum on a U-factor basis because I-joists have much less thermal bridging than rafters made from dimensional lumber.

If the ceiling is going to be finished with gypsum board, a half-inch layer of foil-faced polyiso between the drywall and the I-joists would bring the assembly up to the code minimum on an R-value basis when using the half-pound open-cell foam.

“There isn’t much financial rationale to going better than code-min performance with that roof assembly,” Dorsett says. “The difference in performance between an open-cell R-49 and the more expensive hybrid unvented R-67 using closed-cell foam delivers less energy value than spending the upfront cash cost on rooftop PV solar.”

When a roof valley becomes an issue

By adding chutes to the flanges of the I-joists, Mackay would create the 1 1/2-inch ventilation gap below the roof sheathing. Spraying the underside of the chutes with closed-cell foam and filling the remainder of the cavity with open-cell foam is one approach. Another, which Dorsett advocates, would put the vapor impermeable layer to the interior of the assembly.

But in this particular case, venting will be a problem because the design calls for a long valley.

“Yes, a valley is a problem,” Dorsett says. “That makes it effectively impossible to vent unless the gap is much deeper than the TJI flange, and vent holes can be drilled in the TJI webs to allow air to flow parallel to the beam (on both sides) at the bottom of the valley.

Mackay notes that he didn’t want any valleys in the roof, but between his architect and a couple of builders was talked into it. “That’s the roof I have,” he says, “and so I’m stuck with it now.”

If that’s the case, and venting is not possible here, what’s the best approach?

Dorsett suggests that the most economical approach is an R-49 assembly consisting of 4 inches of closed-cell foam (the type with an HFO blowing agent to lower greenhouse gas emissions) followed by 5 1/2 inches to 6 inches of half-pound foam. That gets the assembly to R-49.

“Don’t even bother filling the remaining 4 inches,” he adds. “Use it as your electrical chase … Take the cost savings from that and apply it elsewhere. The difference in energy use would be more than covered by spending that money on an expanded PV array, but there may even better bang/buck elsewhere in the design.”

Steve Mackay has a 2.5:12 roof pitch on his project so with or without what happens to venting in roof valleys, recent building codes only allow unvented roof assemblies for pitches 3:12 and greater (IRC 2015 Section R806.5.2.7). PETER YOST NOTE JUNE 28, 2019: This is an incorrect statement yet left intact so that the comments below make sense.

In my recent Wingnut testing of ridge vents (see posts here and here), roof pitch does seem to make a big difference for roof ventilation driven by both stack effect and wind.

I am seeing more and more complex, low-slope roof assemblies on new homes in cold climates — particularly combined with no rake or eave overhangs. While this is good for the building investigation business, it’s just not a good mix from the moisture management side of things.

Having said that, an airtight ceiling lid for low-slope, unvented roof assemblies is critical, so both Albano’s and Dorsett’s assembly recommendations are dead-on. See the illustration and table below from the Building Science  reference cited by Albano. 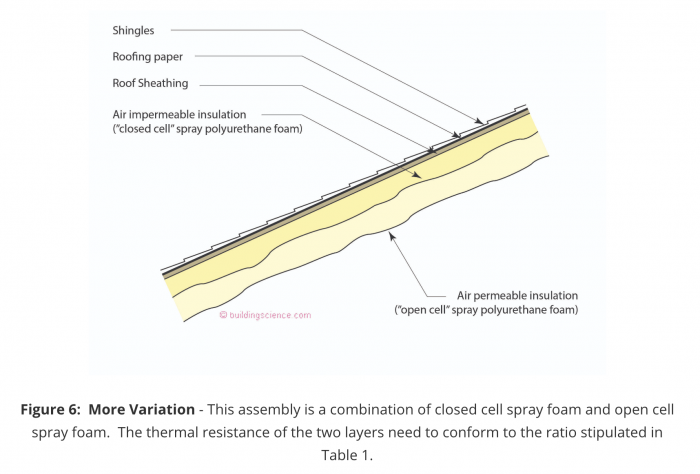 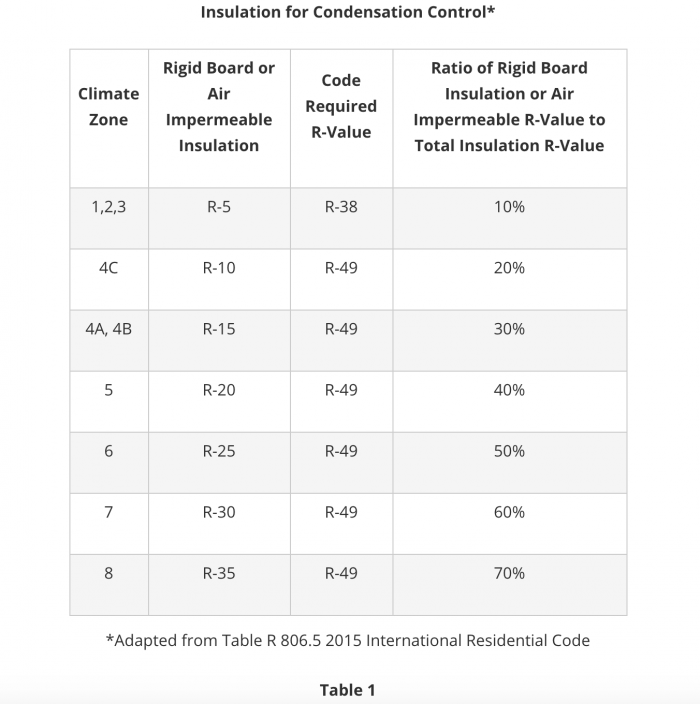 I have two additional cautions: