Learn about this promising material's characteristics and market status

This episode of the BS* + Beer show features Shaun St-Amour, Scott Dionne, Jim Muhaw, and Will Grupenhoff explaining the benefits of wood-fiber insulation. Each shares deep information about the products they sell—the properties and applications as well as the manufacturing processes and status in the U.S. market. They discuss three types of products—blown-in, batts, and board—at one point describing wood fiber as “the Gortex of insulation.” We see a demonstration of the material’s fire-resistant and hydrophobic characteristics, learn about its vapor-open value, and are introduced to the world of fasteners. Questions addressed include: Do we need a WRB over wood-fiber insulation? How does the R-value of loose-fill compare to that of dense-pack? Are there concerns with pests? What about thermal drift? What’s it like to work with—are any special tools needed? With four experts representing four different products lines, the episode is a must for anyone interested in knowing more about this promising product.

Join us on Thursday, May 6, from 6 to 7:30 p.m. EST when Ace McArelton, Alan Gibson, Steve Hessler, and Ilka Cassady will discuss offsite panelization. Alan will talk about the kind of panels that his company, GO Logic, and others such as Ecocor and Bensonwood produce. Ace from New Frameworks will explain why the company built their business around panelized construction methods. And Steve Hessler and Ilka Cassidy from Holzraum Systems will give a glimpse into the company’s leading-edge technologies. We will likely hear about costs and timelines, as well as strategies for convincing clients to go the panelization route.

In Favor of Wood-Fiber Insulation

Ace McArelton is a co-founder, managing partner, and board member of New Frameworks, and holds it down as Financial and office manager, project manager, and occasional site leader. Ace is particularly passionate about building positive company culture, equity, and relationships between people. Ace lives with his partner and their bulldog-boxer mix and orange kitty in Chittenden County, Vermont.

Alan Gibson is a builder by trade and the owner and general manager of GO Logic. Alan founded the business with architect Matthew O’Malia in 2008 with the sole purpose of designing and building Passive House buildings. After finishing his degree at Brown University, Alan landed in Maine in the late ‘80s as an organic farm apprentice, then bought 75 acres of land and built his own house. From there his carpentry work evolved into a general contracting business where, in spite of some resistance, he encouraged as much energy-efficient design as possible. Eventually the high-performance concept caught on, and when Passive House arrived it codified much of what he’d been trying to do all those years. Alan is a Certified Passive House Builder and Designer. He is secretary of the board of directors of Passive House Institute US and the Passive House Alliance US. He lives with his family on a farm in Belfast, Maine.

Ilka Cassidy is co-founder of Holzraum System. She is passionate about Passive House envelope design and building science, with a focus on the benefits of natural building materials. She grew up in Germany and received her diploma of engineering/architecture from the RWTH Aachen. Ilka connected to the U.S. during her year at the University of Washington in Seattle, where she won a scholarship to study in the graduate program. Eventually she moved to Philadelphia, where she co-founded C2 Architecture in 2005. She has worked on multiple projects as a certified Passive House consultant, and is an active member of Green Building United in Philadelphia. 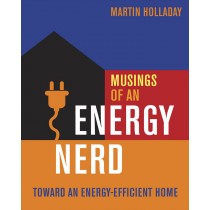 We have selected our fourth book: Musings of an Energy Nerd: Toward an Energy-Efficient Home by Martin Holladay, which can be purchased at the Taunton Store.

Kiley Jacques is senior editor at Green Building Advisor. She can be reached at [email protected]. Photo courtesy of 475 High Performance Building Supply.