Big Variations in Annual Energy Use

In a net-zero-energy building, the weather determines how much energy you need to buy

One thing I learned while following the energy usage of buildings I designed was that as a building’s energy needs are reduced, and the fraction of those needs supplied by solar energy increases, the variation in backup energy (purchased energy) increases from year to year.

First, we’ll look at the variation in heating load. This winter (November to February) has been 20% colder than last winter. 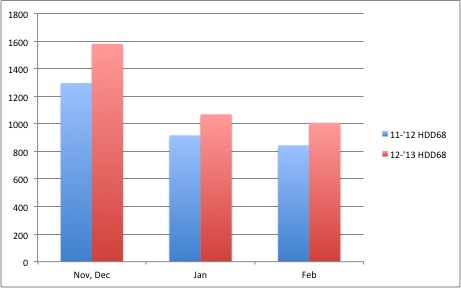 We’ve used 23% more energy over these months. Here’s how the usage breaks down between the heat pump and all other uses. Note that heat pump energy used is up 32%. 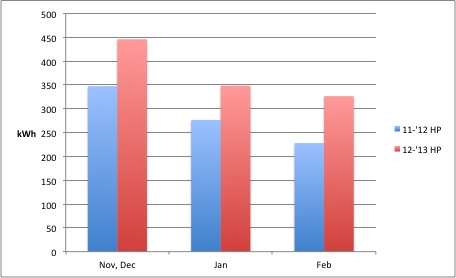 As it gets colder outside, the heat pump efficiency drops, so it makes sense that heat pump energy use goes up faster than heating demand.

However, another difference in what we use is due to the fact that Jill now works 3/4 time, and is home on Mondays and Fridays, so I’m guessing that the average thermostat setting has gone up a tad, and there are more kWh going to lights, computer, music, etc. All other uses are up 15%, with the biggest bump in January. 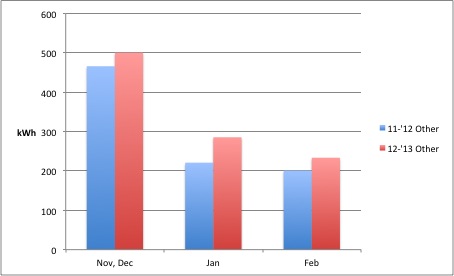 Meanwhile, it’s been noticably cloudier this winter, so PV production over the four-month period is down 22% compared to last year. 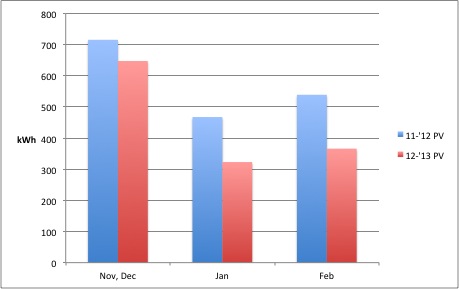 Consequently, while our net imported energy last year over this period was 18 kWh, this year it is 45 times higher at 804 kWh. 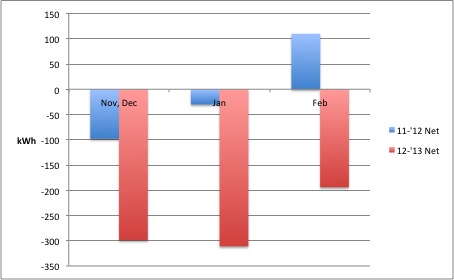 An Introduction to Photovoltaic Systems

Generating Electricity from the Sun

A Tough Energy Code Is the Worker’s Friend

If you design or build zero-net-energy buildings, it’s important to communicate to the owners that these year-to-year variation are significant. Manage expectations!

Beyond a certain baseline, how much energy they use for plug loads, appliances, and lighting is under their control. How much they use for hot water is similar.

At a given thermostat setting, how much energy they purchase for heating and cooling depends on the weather and the amount of sun available, and how much a solar electric or solar thermal system generates depends on solar availability and how much of the time the collectors are covered with snow.

To reach net-zero during cloudy years, you’ll have to oversize the PV array

If you want to be pretty certain that a building is net zero every year, the solar electric system probably needs to be oversized by close to 30% (a SWAG). Driving the building’s heating load down will make this variation smaller, by making one weather-dependent factor smaller.

Marc Rosenbaum is director of engineering at South Mountain Company on the island of Martha’s Vineyard in Massachusetts. He writes a blog called Thriving on Low Carbon.