In a large residential building, you don't want any air leaks between apartments

At some point in our lives, we’ve all been in an apartment building or a hotel and smelled cigarette smoke or cooking odors from a neighbor. Or maybe you’ve heard an argument (or other things) going on next door that you didn’t want to hear. Let’s face it: living in apartment buildings is not without annoyances.

Fortunately, there are simple ways to alleviate some of these problems: by sealing up the gaps in the walls between apartments. This is “compartmentalization.”

Many people still have the mistaken impression that air leakage is good for health. But when they say that “Yeah, sealing is good, but you don’t want to make it too tight,” what they are really saying is, “Don’t forget about air quality.” I agree — air quality is important. Moreover, research has shown the link between airtightness and ventilation performance. When I worked at Steven Winter Associates (SWA) in Connecticut, we found that ventilation systems work better with tighter apartments.

In this article, I’m going to lay out some of the arguments for compartmentalizing buildings. In an upcoming article, I’ll describe inexpensive ways to test a building to save energy, improve fire safety, and improve health, and I’ll discuss a proposed change to the International Energy Conservation Code.

Building scientists have been talking for years about “stack effect” — the tendency of temperature differences between the inside and outside of tall buildings to create pressure differences and drive air infiltration. It’s one of the first concepts covered in building science courses, and it’s been in ASHRAE Fundamentals for a long time. We’ve heard over and over that dividing larger buildings into smaller airtight blocks by compartmentalizing cuts down on stack effect. The idea is that if you cut the vertical distance over which the driving forces of stack effect can act, then you can reduce the rate of infiltration.

Should Occupants Have Control of Their Home Ventilation System?

How Much Fresh Air Does Your Home Need?

But many benefits of compartmentalization don’t have anything to do with saving energy, at least not directly. Take the example of an apartment building. Speaking generally, well-sealed apartments inhibit the passage of secondhand smoke, smells, and other pollutants; reduce sound transmission; and impede the passage of pests and vermin between neighbors. They are also safer in a fire, because they help prevent the passage of hot gases that make fires spread and smoke that suffocates people.

In addition, compartmentalized apartments make buildings more resilient to changes in building operation. During research that I was involved in at SWA, studying buildings in New York City, we found many benefits of compartmentalized apartments, and a lot of the benefits had to do with controlling indoor air quality. In short, the better sealed your apartment is, the better it functions in real life.

Pressures in real buildings change all the time in response to changes in temperature, opening and closing windows and doors, changes in HVAC operation, and changes in wind and direction. With these changes in pressure come changes in how air flows into and out of apartments.

The most common ventilation strategy in multifamily buildings — constant exhaust from apartments, either centrally or individually — often doesn’t work like it’s supposed to. One reason is that central ventilation systems are often very poorly designed and constructed. Not enough thought goes into designing them, and often the registers are simply way bigger than they need to be. And not enough care goes into building ducts. They’re often extremely leaky, and most building codes don’t require testing of low-pressure exhaust ductwork. Both these issues lead to pressure loss, very poor balance, and sometimes vastly different airflow from apartments.

Exhaust-only ventilation may work just fine in single-family homes. The exhaust fans put the home under negative pressure, and as exhaust is pulled out, fresh makeup air comes in through gaps and cracks in the exterior envelope (ideally not from the attic or basement) and balances the flow. But in apartment buildings, SWA found that makeup air for exhaust-only systems is often more likely to come from your neighbor who smokes or from the hallway than it is from “clean” outside air. Furthermore, those flows may be reversed by any of the changes to the building pressure regime noted above.

Even supplying makeup air straight from identified sources faces difficulties. Supply air direct from a rooftop ERV/HRV must have well-designed, well-sealed ductwork, and it probably should have self-balancing dampers (for example, CAR damper by American Aldes). In-unit supply fans like the through-wall heat exchanger Lunos, and small fans fitted to fan-coil units or PTACs, must be powerful enough to overcome stack forces in all parts of the building at all times. In laboratory conditions, these fans may move the specified amount of air, but if you place them throughout a real building under winter conditions, with high positive pressure at the top of a building and negative pressure at the bottom, each fan must compete with a different pressure regime. The result is that some of the apartments get more fresh air than others.

The unwanted gift from your neighbor

By doing long-term monitoring of pressures in apartments, SWA was able to visualize which way the air moves in a building over time with several different ventilation systems. We also put sensors on windows and doors to know when they were opened. And in one building, we could see a major change in the pressure regime of a group of apartments when someone opened a window.

I often use the following example to illustrate what happens. 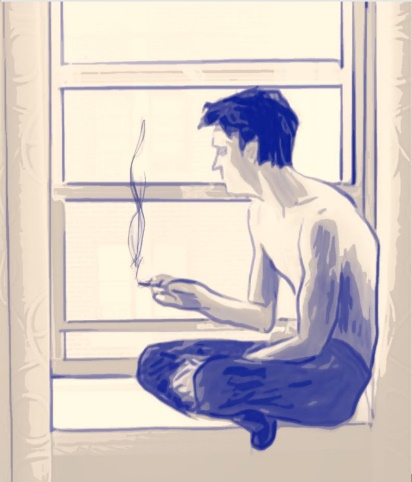 When your smoking neighbor opens the window, the pressure in that apartment drops to virtually zero with respect to outside — the open window allows air to move in and out freely. But your apartment and the rest of the building is still under negative pressure because your windows are closed and the exhaust vents are still sucking. What happens to the neighbor’s smoke?

It gets pulled into the hallway, and into the other neighbors’ apartments, including yours, because the slight negative draw caused by the exhaust system in your apartment pulls it there. (See Image #1 at the top of the page.)

We know this happens because we can look at the pressure monitoring data from different buildings. In that building, on that floor, during that weather, with the windows in that particular configuration, air flows out of the neighbor’s apartment, into the hallway, and into yours. But why is it that you can only smell the smoke on some days? Because all those variables mentioned — windows, doors, HVAC operation, temperature, wind — are all changing all the time, and only sometimes do they line up to deliver that gift from your neighbor.

There are some options to help ensure that makeup air comes from intended sources, like passive vents in the exterior envelope. For example, trickle vents are small slotted vents often mounted in a window frame; they are common in the U.K., and some U.S. builders use them as a low-cost solution to providing makeup air. Other devices include small vents in through-wall HVAC systems and even engineered holes straight through the wall.

All these strategies rely on two usually false premises: that the vents are the largest hole in the apartment envelope, and therefore the most likely path for makeup air; and that the apartment is reliably under negative pressure. Unfortunately, this is almost never true, at least not for all parts of the building at the same time. Passive vents, which ultimately are simply expensive holes in the wall, are often dwarfed by the size and number of other possible leakage pathways in the apartment, most obviously gaps and cracks around the door to the hallway. Check Martin Holladay’s article that nicely sums up the research that we did (“Passive Air Inlets Usually Don’t Work”).

In order to make sure that makeup air comes from only where we want it to in an exhaust-only building, SWA research found that many apartments would probably need to be sealed to less than 0.1 CFM50 per square foot of enclosure (0.51 L/s @50Pa per m2). For a one-bedroom apartment, that might be 80 CFM50 (38 L/s @50Pa) total, including leakage from the apartment door. In case you don’t have any point of reference, that’s insanely tight and not likely to be achieved without some help from a magic bullet.

Still, you can see the difference in the measured pressure response of two apartments sealed to different levels. I’ll greatly simplify here, but the first apartment (see the graph directly below) was sealed very tight, while the second apartment was sealed only moderately well.

Andy Padian, the guy who hired me at SWA, used to tell the story of old Mrs. McGillicuddy, who lives on the first floor of an equally old apartment building in New York City. One night during a snowstorm, this building is toasty warm, even overheated, which is common for New York buildings. That’s just fine with old Mrs. McGillicuddy, who’s always cold. But the residents on the top floor are so hot they are about to pass out, so they open the windows for relief. This is opening the flood gates for the chimney effect. Relief does come to the top floor — not through the open window, but through the gap around the hallway door. Air rushes up from the lower floors and floods into the top-floor apartments, cooling them off. Much better.

But poor Mrs. McGillicuddy on the first floor begins to suffer because the makeup air for that upward draft comes through the gaps and cracks in her walls and windows. She gets cold, rings up the building superintendent, and screams at him to turn up the heat, gosh darn it. He begrudgingly obliges, not wanting to feel her wrath any more tonight, and the whole building gets hotter. Thus, the cycle continues and the heating bill skyrockets.

Two things are at play here: one is heating system imbalance, which we all know is bad. The other is that apartments are far too well-connected to each other and the common spaces.

I have to admit that the data that we got from our research was sometimes messy. The hard thing about doing research in occupied buildings is that they contain occupants; and occupants, no matter how much you instruct them to not touch your sensors or open the windows, will do whatever they please.

But to me this was instructive. We had a hard time figuring out which way the air was flowing in the building because people were always opening doors and windows and messing it up! A true working ventilation system in a multi-unit building must be able to deal with this. Herein lies the lesson.

There is quite a lot of wisdom in unitizing HVAC systems and controls. Ductless minisplit systems are a great example of this. In fact, many experts believe that individual electric systems will be the way of the future in a post-fossil-fuel world. But you can’t really count apartments as unitized until you seal them from each other.