As the biting cold of winter hit the Great Lakes area last December, many building owners started to see signs of moisture damage on parts of their walls and ceilings. As we keep indoor temperatures consistent while the outdoor temperature drops, the difference between indoor and outdoor temperatures (the ole’ Delta T, as they call it) becomes greater. This difference pushes indoor air upward; if there are leaks in the ceiling, the air goes up and out and into the cold attic space. That’s the stack effect — slightly less powerful than the force Darth Vader uses, but equally nefarious.

The summer’s high humidity is stored in the mass of our buildings. As fall comes around, the stored humidity is released as the indoor air’s humidity drops (which happens when the cold, dry winter arrives). In early winter, humidity levels indoors are high, and it’s common at the first bite of winter to see signs of attic condensation — or even condensation in the living space.

If not promptly remediated, this combination of factors is destructive. Usually by late January the store of humidity in the house has dropped as air is exchanged intentionally through mechanical ventilation systems or unintentionally by uncontrolled air leakage through poorly sealed building enclosures. The stack effect drives conditioned air out of the living space and often introduces the moist air into spaces that can’t handle humidity (because attic voids are cold).

The cold attic quickly converts the water vapor to water in a liquid or even solid state. Either way, water in liquid or solid form isn’t desirable in closed attic spaces. Though some large-volume, well-vented attics can handle a bit of heat and humidity, small-volume attics often can’t handle the moisture. They start to show signs of deterioration more quickly.

Below are examples of careless workmanship in detailing the components of an air barrier system. 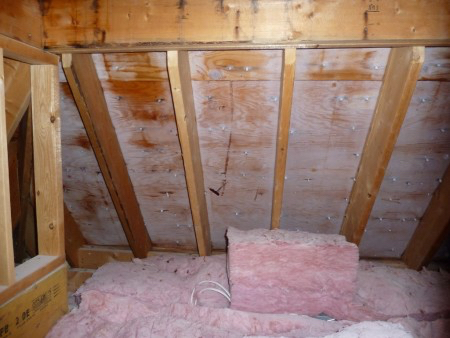 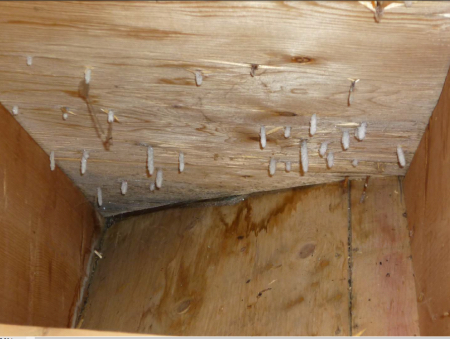 The nails are made of metal which is very conductive. The cold night sky or brisk winter winds keeps these nails colder than the wood sheathing and they are the “canary in the coal mine” for attic moisture. 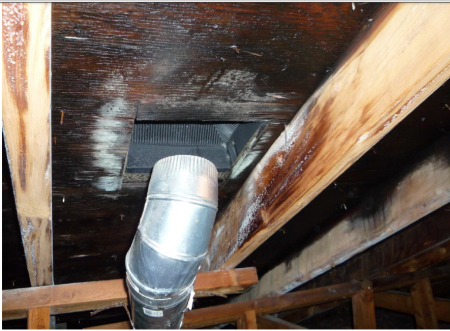 This attic had more mold on it than a wheel of brie. It even smelled like cheese. You wouldn’t fill your car’s gas tank by aiming the nozzle 3 inches from the filler cap, so why do it with your bath fan in the attic? Aiming this bath exhaust duct at the hole in the roof sheathing had equally disastrous consequences. The plywood sheathing was a mere three years old and had to be replaced.

Because we are often called in to diagnose problems involving discomfort, mold, and condensation in existing buildings, we tend to want designers to spec simpler shapes that are easier to detail and air seal. Though it is possible to design really funky-shaped Passive Houses like Libskind’s signature pre-fab Villa, the sad truth is that the run-of-the-mill builder doesn’t yet have the skills to make this type of design work. 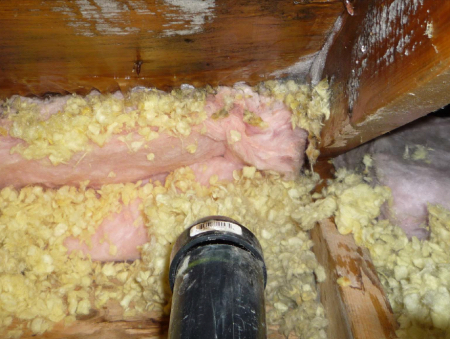 Not even the plumbers can get it right 100% of the time: The unglued joint in the plumbing vent likely contributed lots of moisture to this icy attic sheathing.

A close look at some problem houses

Our most recent and extreme example of moisture in a flat-roofed building involves new town homes that are showing visible signs of moisture damage on the finished painted drywall indoors. These are three-story homes. The stack effect is a bit more pronounced in tall structures, so any holes in the top floor ceiling will be feeling the force!

Adding insult to injury, these town homes had flat roofs with maybe 5 inches of a “ventilated” cavity using criss-crossed purlins. I put the word “ventilated” in quotes not only because cold air can’t carry much humidity away in the first place, but also because most flat roofs are cursed with a few design flaws. It’s notoriously harder to get air to move through a horizontal air channel than it is through a sloped vent channel.

Assume two homes with identical footprints with identical loads of humidity leaking through the attic floor. One has a flat roof, the other a steeply pitched Victorian roof. Assume that both roofs have the same perimeter ventilation at the eaves and the same number of field vents. Note that the field vents for each roof are very different in shape, size, and free-flowing area. The flat roof vents are tiny in cross section (a few square inches), whereas the typical mushroom vent has over 100 square inches in free-flowing area.

In addition, air has to plow around cross purlins and insulation bits to flow through the ventilation channels (and hopefully pick up humidity). You need serious wind to push the air through. Compare that to a high Victorian roof with big, open vents and a big, open attic: because the stack effect can set up a convective loop in the attic, there is a bit more of an advantage in carrying some moisture out. You also have a bigger area over which to distribute the moisture load.

The flat deck faces the open night sky. That means the flow of heat is from the roof to the cold sky. A pitched roof might get incidental heat bounced back to it from adjacent structures like trees and buildings — but not the flat roof, where all the heat goes to heaven.

For a high-performance building, the interface between the living space and the attic needs to be simple. If you really need your ceiling to have ornamentation, then build a high flat ceiling that’s airtight and drywalled. Then just build soffits under it. At least that way you’ll have a continuous attic floor. 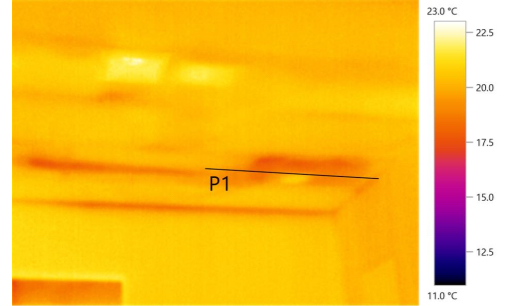 An infrared shot of the ceiling under normal conditions. Note the far corner recessed light shows signs of being colder. We suspect this is because of condensation sitting on the top side of the poly, as evidenced in a photo below. 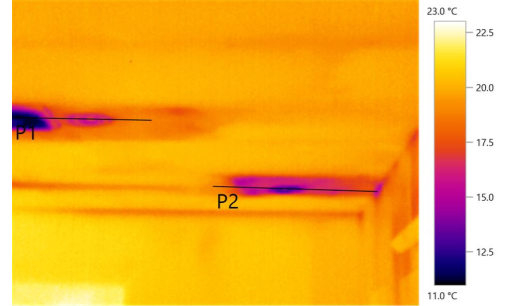 With a blower door running, the house is depressurized and the stack effect is reversed. Now, all breaches in the air barrier change temperature rapidly and we take a second image of the same location. We can see the bath fan is very cold — the damper is not working — as are the two recessed lights. 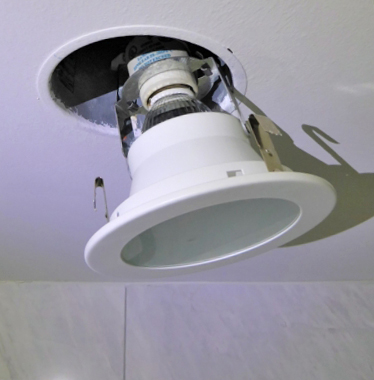 The shower stall recessed light still showed signs of air leakage even though it had a protective glass cover. 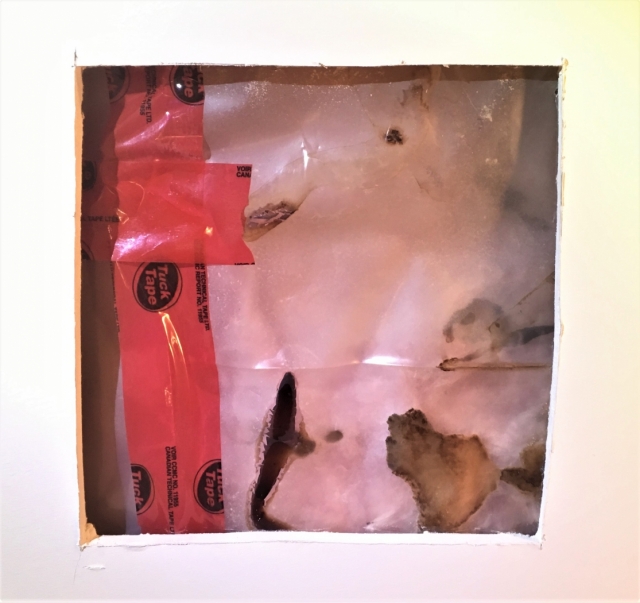 An incision in the ceiling drywall discloses water that has dried (the dust and tannins may be from the wood) on the cold side of the poly. 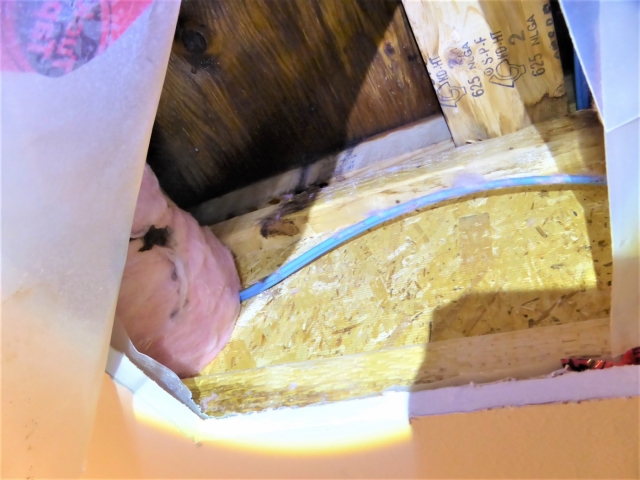 Pushing the poly and insulation aside, we see the ceiling/roof trusses and a pair of cross purlins holding up the flat roof sheathing. It’s saturated to the touch and feels mushy. 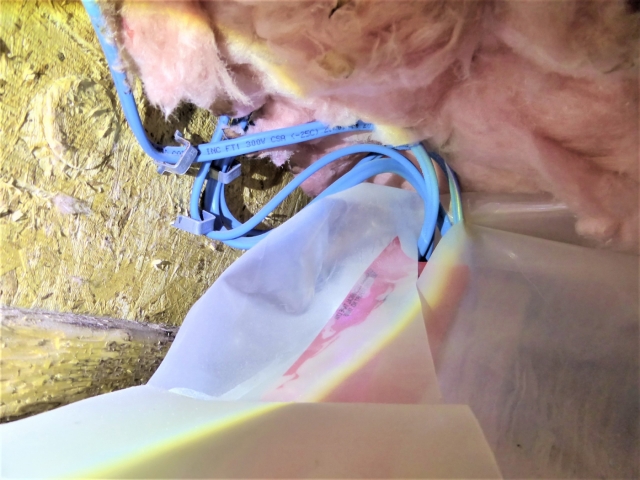 Looking at the recessed light vapor-barrier boot: the blue wires clearly penetrate the boot but are not air sealed. 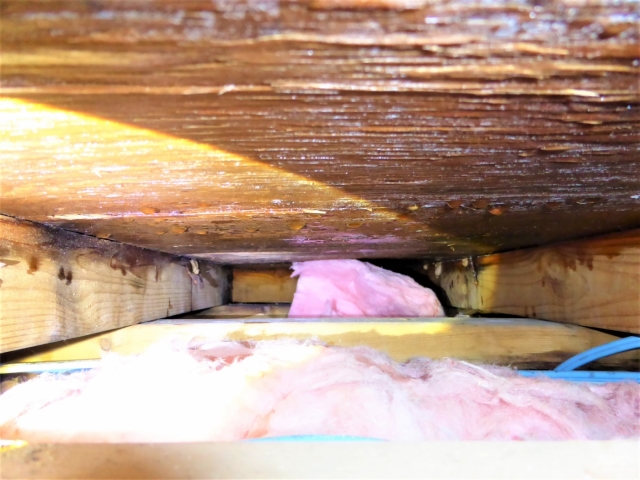 Greg Labbé is co-owner of BlueGreen Consulting Group, a high-performance home consulting firm that works with architects, builders, and homeowners to optimize the energy performance of new and existing homes through detailed energy modeling and site testing.