We do a lot of heating and air conditioning system design at Energy Vanguard. Alexander Bell, who goes by Andy, is our design wizard, and I’ve been getting involved with the process again lately.

When I talk to potential clients, a lot of them tell me their contractor wants to size their air conditioner using a rule of thumb. The rule is usually something like this: Install one ton of air conditioning capacity for every 500 (or 400 or 600) square feet of conditioned floor area. How far off are they? Let’s take a look.

A bit of our Manual J data

True HVAC designs always start with a load calculation. So we can look at the data. The graph below shows data for just a few buildings we’ve done in the past few years. Forty of them, to be exact. We’re in the process of putting all our data into a spreadsheet so we’ll have more to show later.

Here’s what our data show. 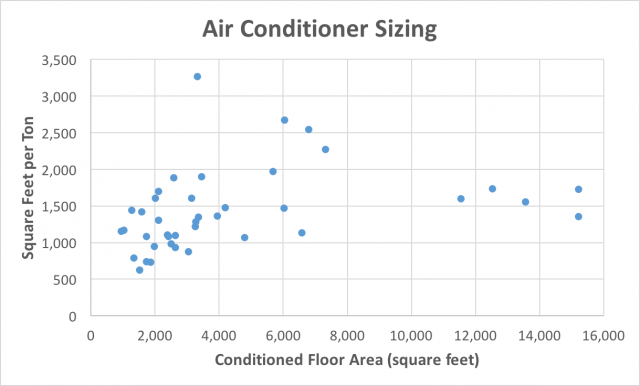 Note that not a single one of these load calculations was as low as the high end of the typical range used in rules of thumb. The low number on that graph is 624 square feet per ton. The majority of the cooling loads shown here are above 1,000 sf/ton. Only eight are below 1,000 sf/ton.

How to Tell If Your Air Conditioner Is Oversized

How to Perform a Heat-Loss Calculation — Part 1

How to Perform a Heat-Loss Calculation — Part 2

When Do I Need to Perform a Load Calculation?

In case you’re wondering, I threw out the data for cooling loads in cold climates when I plotted this graph. We had one in Maine that was nearly 4,000 sf/ton, but that’s not really relevant because Maine doesn’t have much of a cooling load. Probably a majority of the homes there don’t even have air conditioning. Most of the homes in the sample set were in the Southeastern U.S., including Texas, but we had a couple in California and several in the Midwest as well.

The average of the 40 shown above is 1,431 sf/ton. Yes, that’s about a thousand sf/ton higher than the common rule of thumb in use.

That’s till a lot different from the 500 sf/ton rule of thumb. Oh, and that 10% difference is usually offset by the oversizing inherent in Manual J.

Here are a few points that came up in the comments to the article and on LinkedIn and Facebook as well as some takeaways that I feel need to be emphasized.

1. No matter the number, you can’t use square feet per ton to size air conditioners. I posted the square feet per ton results we got from 40 Manual J load calculations in hot and mixed climates. The average was 1,431, but you can’t use that to size air conditioners. You have to do an actual load calculation. Those 40 results ranged from a low of 624 to a high of 3,325 sf/ton.

2. If you tell me that your load calculations average 400-600 square feet per ton, I assume you’re not doing them correctly. Is it possible that homes meeting current building and energy codes need that much air conditioning? Yes. If they have a lot of window area, they face west, and are in states with weak codes. My friend Mike MacFarland of Energy Docs in California gets 1,500 sf/ton for retrofits and achieved 3,350 sf/ton for a new zero energy home. And their design temperature is 102° F so don’t tell me this doesn’t apply in Florida or Arizona.

3. You need room-by-room load calculations to get the air flow right. Contractors who use whole-house rules of thumb often don’t get the right amount of conditioned air for individual rooms. The result is one of the most common homeowner complaints: rooms that are too hot or too cold. (Of course, enclosure problems also play a role in this.)

4. The square feet per ton you get from Manual J still gives you an oversized system, even when you do it correctly. Mike MacFarland says he finds that Manual J results in equipment with 20-40% too much capacity. David Butler says 15%. In my own condo, for which I’ve measured AC runtimes for the past two years, I’m seeing about 75%. (I’ll write more about my condo soon.)

5. It’s easy to get whatever load you want when you do a Manual J load calculation. I’ve written about this before. Putting in the wrong values for windows is an easy way to add load, as is putting in too many people, using exaggerated design temperatures, and the wrong orientation. If you want 500 sf/ton, it’s not hard to produce a Manual J load calculation that gives you that number. I don’t think it’s a matter of someone starting out thinking they want to hit 500 sf/ton. It’s more a matter of not believing the lower loads and changing design temperatures, number of people, and other factors to match what they believe are the correct conditions to model. That’s not the right way to do it, though.

Designing an HVAC system starts with proper sizing. Look at the square feet per ton number you get to see if you’re in the ballpark. If the number is less than 1,000 sf/ton, there’s a good chance the number is wrong.

Rules of thumb must die. Start with a real load calculation.