Relative Humidity and Makeup Air at a Tight Minnesota House

Humidity is high, and it’s going to be tricky to light the wood stove when the range hood fan is on

By Elden Lindamood | October 18, 2016
View Gallery 6 images
The south side of the house has plenty of glass. This photo was taken on October 4th. In June and July, all of the south glass is completely shaded by the roof overhang.
Image Credit: All images: Elden Lindamood The north (entry) side of the house. It still needs stain, but, well, you know... My favorite space is the screenless porch. I’ll work on the screens next spring. The windows have drywall returns on the jambs and head. The window stools are finished with slate tile and a simple fir apron. I built a cat box box and ventilated it via the HRV exhaust duct. It controls the odors well. Our solar-powered cat recharging on the living room floor.

This is the fourth installment of a blog series by architect Elden Lindamood about the design and construction of his own home. The first installment was called A Low-Energy House for Northern Minnesota.

Catherine and I moved into our new mostly finished house in May. Since then I have continued to work on some details and “by-owner” items, but the house’s envelope and mechanical systems were finished prior to us moving in. There has been a bit of a learning curve, as expected, to get the dance steps right as to when to open windows, and when to switch on the air conditioning. So far it has gone fairly well, but there have been a few unexpected conditions to sort out as well.

Before I delve too deeply into the details, I have a few quick observations about our new digs.

An Induction Cooktop for Our Kitchen

Going High-Tech With an Induction Cooktop

All About Wood Stoves

A Low-Energy House for Northern Minnesota

Foundation and Nailbase Details for a Minnesota House

Installing Windows in a Minnesota House

A Follow-up From Northern Minnesota

The damper on the range hood fan is laughable

So now to the meat of it all. If you recall, our house is extremely tight: the pre-drywall blower door test result was 0.2 ach50 (58 cfm50). I haven’t yet done a “final” test, but hope to do that soon.

When we were balancing the HRV and adjusting the diffusers on the ducted minisplit, we did a bunch of experimentation with the HRV, the makeup air (MUA) unit, and the range hood.

The range hood is rated for 125 cfm on low speed and 300 cfm on high speed. It is ducted directly through the wall out the back of the unit, so the actual airflow rates are probably close to the advertised rates. The so-called damper in the hood itself is somewhat laughable, as you can see daylight around most of the edges. It might keep a squirrel out, but cold air? Not so much.

I added a second dampered hood on the exterior to improve the condition as best as I could, but even that is only mildly better. Despite that, I am very glad that we decided to go with a vented unit rather than a recirculating hood as I originally planned. We have been cooking a good bit, and being able to exhaust all that humidity from boiling down our tomatoes has been nice — assuming, of course, that I crack a window when the hood is running.

Remember that we have a wood stove and a makeup air unit which has a damper on the cold air side. But the house is still extremely tight even with these “openings.”

Here is a video of the hood running with all the MUA off and windows in the house closed:

2) I can turn the makeup air unit on to pressurize the house when starting and/or using the wood stove, without having the range hood on.

We haven’t burned any fires in the wood stove yet, but I am sure the range hood will backdraft the stove. My mechanical contractor thinks it might be okay once the stove is hot, but not having any definitive numbers for how many cfm a hot wood stove will draw — about 40 cfm seems to be the most common guess — it will have to be an experiment.

In the worst case, we’ll have to crack a window to use the range hood with the wood stove lit, but my rationalization is that the wood stove will overheat the house quickly anyway, so opening a window may not be a bad thing.

Also, the stove is in plain view from the hood, so if there is a problem we’ll know it right away. I could have opted for a larger makeup air unit, but that comes with a larger electric heater, which I wanted to avoid. I’ll let you know my experiences with that in a future post.

I am not overjoyed with the ducted minisplit, but not completely disappointed with it either. When it is set to cool, it runs 100% of the time. This is, of course, because it modulates down to be more efficient, only supplying what is needed to offset the internal gains. But, when you appreciate the dead quiet serenity of living in the country, it would be nice if it even occasionally shut off.

I thought I could trick it into cooling too much and eventually shutting off by turning the fan all the way up, but that didn’t work. I have resigned myself to the fact that if the AC is required, the fan will always be on. We have yet to run the unit in heat mode for any length of time.

Another gripe about the minisplit is Fujitsu’s poorly designed wall control. When the flip-down panel is closed, you have only three functions. You can turn the unit on or off, and you can adjust the temperature up or down in 2 degree increments.

Why only 2 degree increments? I couldn’t tell you. If you want to switch the mode between cooling and heating, or auto, you need to flip open the door where you are now presented with 13 additional buttons, eleven of which you will never use. 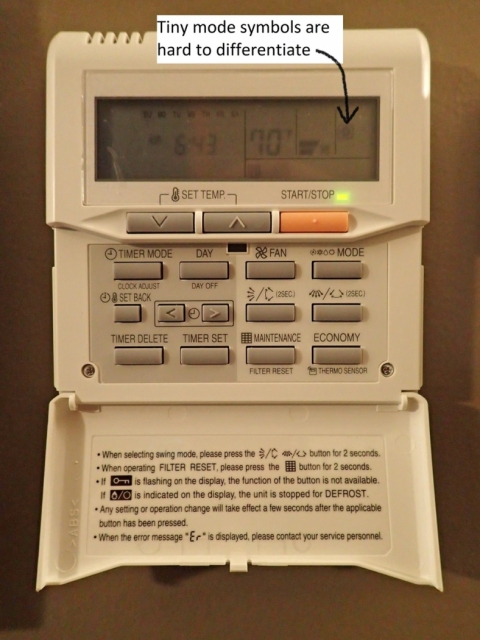 If it was your goal to switch the mode, you better have your reading glasses and a flashlight with you, because a) the LCD is not backlit, and b) the microscopic mode symbols on the LCD are almost indistinguishable, even in good light (see photo at right).

Lastly, the display tells you the set point when the units is on, but it doesn’t tell you the indoor temperature, which is annoying. And it doesn’t tell you either temperature when the unit is off. I wound up buying a large-display indoor/outdoor thermometer and mounted that right next to the Fujitsu control. It seems that in an effort to design an interface that can do everything, Fujitsu failed to design one that can do the basic functions easily.

The indoor relative humidity is high

The largest issue we have experienced so far is the indoor humidity. Incidentally, a client of ours called me regarding the same issue in their new house, which is almost exactly the same construction, and close to as good on the airtightness. Neither of us put in a separate dehumidifier, as we assumed that the air conditioner would take care of the indoor humidity. That turns out not to be the case.

The client reports that he hasn’t had any need to run his air conditioner for any length of time, so the dehumidification benefit of the AC is null. I have found that we run the AC more often, but still not enough to regularly keep the indoor humidity down.

I should point out that we have had an unusually humid summer here however. That has made it difficult to air out the house at night, because the nighttime exterior humidity levels were consistently in the 95% range for weeks.

The HRV wasn’t doing me any favors in this regard either, but as I said, the exterior humidity levels really were atypical, so an ERV still may not have been a better choice.

I was keenly aware of this issue because of an anomaly that I can only assess anecdotally. A number of nights, when the indoor humidity was particularly high (70% or more), the smoke alarms would go off or “beep” once or twice. (Why does that always happen in the middle of the night?) This was, perhaps, the largest annoyance of the whole condition. I was thus forced to leave the air conditioning on all night, even when it was cool out, simply to try to knock the humidity down to keep the smoke alarms from triggering. It was in dealing with this that I learned that the minisplit’s “dry mode” is really just dumb.

I was led to believe that the “dry mode” on the minisplit was a dehumidification mode. It is not. The “dry mode,” it seems, is actually a setting by which you can dry out the inside of the condensing unit prior to shutting the system down, lest you grow a fine Legionaries’ culture in there. It has nothing whatsoever to do with dehumidifying the interior air of the house.

With this little nugget learned, I purchased a portable dehumidifier, ran a hose to the floor drain in the mechanical room, and let it run.

The good news is that running the dehumidifier in the mechanical room with the door open reduced the indoor humidity of the house from above 70% to about 50% within 24 hours. It did, of course, also heat up the mechanical room really nice, which in turn necessitated turning on the air conditioning, which further dehumidified the house.

I discussed “installed” dehumidification with a mechanical contractor and was told that for about $1,500 he could put a unit in that would utilize the existing ductwork of the minisplit and would be slightly more efficient than the portable unit I was running. I am not quite ready to make that investment as I am banking on future summers to be more typically dryer, and that the house’s banked construction moisture will dry out this winter.

Only time and experimentation will tell, but I’ll keep you all posted. In the meantime, if I were to design a new system from scratch, I’d likely include a dehumidification system from the get-go.

Those are the basic lessons learned so far. Along with working on the “to-do” tasks like staining the siding and installing screens on the screened porch (see Image #3, below), I also have purchased a TED energy usage monitor that I hope to soon install in my breaker panel to see what my different circuits are doing. This should also allow me to deduce our house’s energy use as distinct from the rest of the farm’s usage since our meter is out at the road.

I’ll report on that data once it is collected. Right now, I’ve got to go install a dining room light so we can see our dinners when the days get shorter.

Elden Lindamood is an architect with Wagner Zaun Architecture in Duluth, Minnesota.