Urban Rustic: A Light Down Below

Window wells bring lots of light into the basement

Editor’s note: This post is one of a series by Eric Whetzel about the design and construction of his house in Palatine, Illinois, a suburb of Chicago. The first blog in his series was called An Introduction to a New Passive House Project; a list of Eric’s previous posts appears below. For more details, see Eric’s blog, Kimchi & Kraut.

We always wanted a basement for our new house. The idea of building a new house on a slab without a basement was foreign to us. Both my wife and I grew up in homes that had very active basement areas, with fond family and friend-related memories.

For both of us, basements were places to go for various games (board games, ping pong, pool, etc.), watching TV with family, a place for bulky exercise equipment, or just respite from the hot summer sun. And to improve the basement’s “livability”, we wanted it to have a 9-foot ceiling height (we felt it made a big difference in our last house over a 7-foot or 8-foot ceiling), as well as large windows facing south.

We also thought that window wells that were more open and expansive could help draw in the sun, hopefully making the space feel less like a dungeon and more like normal living space. (The window wells should have an additional side benefit, but I’ll explain that later.)

After exploring the options, including the Spycor line of products, we decided to go with real retaining walls made of cement blocks.

In researching the Versa Lok products , I came across a series of interesting videos by Dirt Monkey on YouTube about retaining walls.

We like the long-term structural stability of Versa Lok, and it helps us achieve the Urban-Rustic look we’re going for.

We received several estimates, but decided to go with Poul’s Landscaping & Nursery since they had previous experience building these stone basement window wells. We paid a slight premium to do so, but part of that premium reflected their recommendation to use a concrete footing that would be tied into the foundation with rebar. Without it, they had seen too much movement on previous projects, creating future headaches and costly repairs. 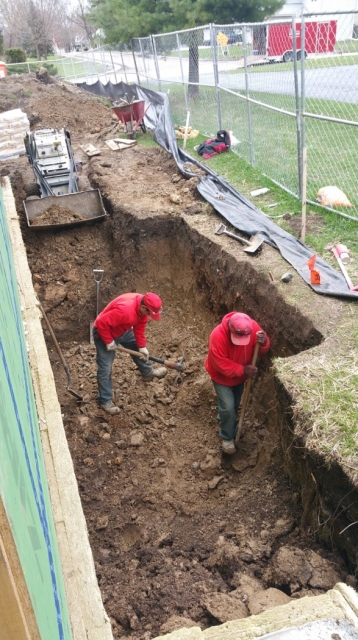 First, Felipe and Candido dug out and shaped the hole for the window well. 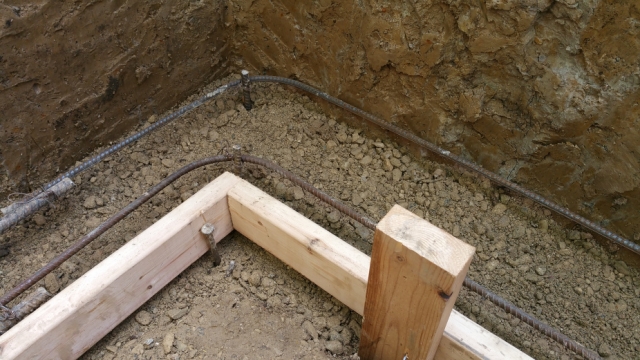 Blocks will rest on a concrete footing, reinforced with steel.

We connected the footing for the window well to the foundation with rebar. After the guys set the rebar in the foundation through the Roxul insulation, I stuffed the holes as much as possible with insulation before they did their pour for the footings. 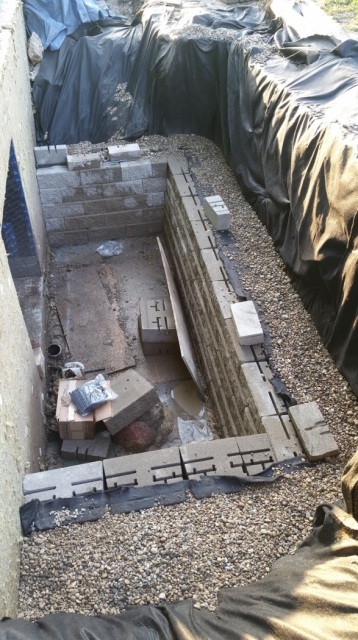 On the next to last day, Felipe and Candido could’ve rushed to finish, but instead they came back for a few hours the following day to complete their work while also doing a really nice job of cleaning up — which we noticed and really appreciated. They even took the time to put back scrap plywood sheets that ran from the driveway to the front step so I didn’t have to.

Felipe has been working for Poul’s for 40 years (the company has been around for 50 years). Putting that into some kind of perspective, that means Felipe’s been doing this kind of work since the Jimmy Carter administration — that’s astounding.

Candido and Felipe make a great team: they seemed to really enjoy working together, they’re both diligent and conscientious, and it was fun to watch them do their thing — a mixture of back-breaking labor and skill.

On our own again

This project began for us back in the summer of 2014 — nearly three years ago — when we first sat down with Brandon Weiss in what was then his new office in Geneva, Illinois (as detailed here).

Things did not go well for us with Brandon or his company, Evolutionary Home Builders. After we decided to move forward and try to complete what we started, the question became: Who do we hire as our next builder?

That led to our interactions with Mark Miller and Katrin Klingenberg (detailed here). PHIUS (Passive House Institute U.S.) did not seem like a resource we could utilize — the Passive House world is small, smaller still when you reduce it to a single geographical area like Chicago and its surrounding suburbs. And the thought of interviewing conventional builders, and trying to convince one to take on the detail required in a Passive House level build, seemed overwhelming.

Events revealed they didn’t have the requisite skill set necessary to complete the job, and we have subsequently taken over the project ourselves. It’s taken weeks to get things back on track. When the build is complete, I’ll return to this matter, offering more details that will hopefully help other consumers who want to build a new house avoid our unfortunate experience.

The really sad thing is there are quality people who make a living as general contractors, but unfortunately it remains a minefield out there for consumers without meaningful connections. If you don’t already know the answer to the question “Who should build our new house?” before you start the process, then it’s truly a case of caveat emptor.

And if things should go poorly, you will feel like you’re on a very lonely island.