The second part of my Passive House conference presentation

Everyone knows about the impact of burning fossil fuels on global warming. Maybe not everyone believes it, but scientists first started focusing attention on increasing carbon dioxide levels way back in 1827. The impact of insulation on global warming, however, is relatively new.

About a decade ago, Professor L.D. Danny Harvey started looking at the effect of blowing agents released by the production and use of some foam insulation types. Then Alex Wilson picked it up in 2010.

At the 2016 North American Passive House Conference, I presented my views on this topic. I wrote about the first part of my talk in my last GBA article. Today, I cover the part about using David White’s global warming tool for insulation.

In his calculations, Alex Wilson chose one scenario. He looked at the global warming impact for a house heated with a natural gas furnace. He chose a cold climate with 5,000 heating degree days (HDD), and he didn’t include cooling.

Revisiting the Debate Over Global Warming and Insulation

More About Global Warming and Insulation

The Misleading Numbers Behind the Global Warming Impact of Insulation

Insulation to Keep Us Warm — Not Warm the Planet

The resulting payback showed how long it would take to save enough energy to offset the global warming emissions from the embodied energy in the insulation and from the release of blowing agents with global warming potential (GWP). He looked at several different insulation types and a range of R-values.

The first part of my conference presentation covered what I see as the main flaw with his payback calculations. In the second part, I discussed David White’s spreadsheet tool for calculating the global warming impact of insulation. The nice thing about his calculator is that you can change a lot of the variables and see what the effects are.

I showed three scenarios in my conference presentation. I’ll put them in a different order here, beginning with the gas furnace. If you download the presentation file, you’ll find the two for heat pumps before the one for the furnace.

The graph below shows the output from David White’s calculator for the gas furnace. 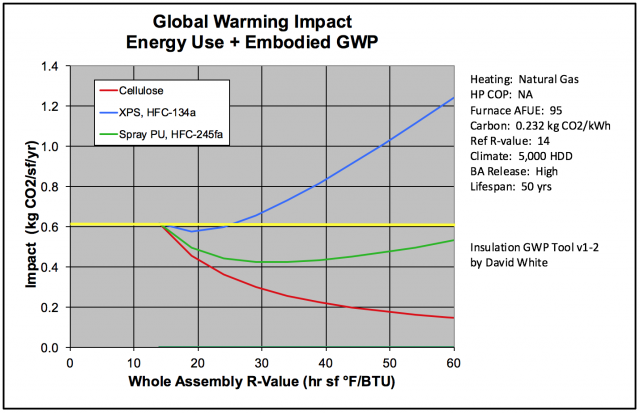 There’s a whole lot going on here, so let me first give you the lay of the land. This tool doesn’t calculate payback. Instead it calculates global warming impact, as measured by the kilograms of carbon dioxide emitted per square foot of wall area per year (kg CO2/sf/yr). That’s on the vertical axis. On the horizontal axis is the total R-value of the assembly. To the right of the graph, I posted a sidebar with the main inputs I used.

One important thing to note: I used version 1-2 of White’s tool. It doesn’t include cooling. PHIUS has version 1-3 on their website, and it has the ability to include cooling energy in the calculations.

Let’s dive into the results now. There are three curves on the graph. They show the global warming impact for cellulose (red), closed-cell spray polyurethane foam (green), and extruded polystyrene (blue). The calculator has a lot more options for insulation types, but I chose these three since they capture the important differences. Most of the others are similar to cellulose.

I chose a reference R-value of 14. That matches what Wilson did in his calculations and means that we already have a wall equivalent to 2×6 cavities insulated with cellulose. The whole-wall R-value of that assembly is about 14. On the graph above, the three curves all begin at R-14.

It’s what happens when add more insulation beyond the R-14 that gives you some guidance here. In this case, all three see their global warming impact drop as you go up from R-14. But cellulose has a different behavior than the other two. It just keeps dropping whereas the other two hit a minimum and then begin rising again.

For closed-cell spray polyurethane foam (ccSPF), that minimum occurs in the mid-R-30 region. As you add this insulation type, the global warming impact keeps getting better and better until you’ve added about R-20. That would be about 3 inches of ccSPF.

For extruded polystyrene (XPS), the minimum comes more quickly, at about R-19. Once you add about R-5 (or 1 inch) of XPS, the global warming impact begins to rise.

When I discussed using this tool with David White and others, most believed that if you’re going to use XPS or ccSPF, you shouldn’t go further than the minimum. I drew the yellow line on the graph, however, to show where the net effect of adding XPS or ccSPF goes from positive to negative. With XPS, you can add about another R-5 before your assembly becomes worse for global warming than if you hadn’t added any extra insulation at all. With ccSPF, it’s beyond R-60, which, at about 7 inches, is also beyond the point that most people would use this type of insulation.

Now let’s look at the results for a heat pump. First, here’s the scenario for a house that uses “clean” electricity. 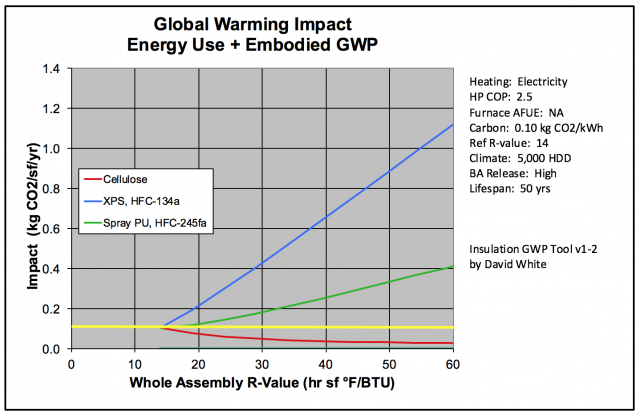 Clearly, the cleaner the electricity, the less you can affect affect global warming emissions by saving energy. In the graph above, notice how low the yellow line is. As the the three insulation curves diverge from the R-14 starting point, only the cellulose makes sense here. (Again, there are a lot of other insulation types that perform similarly to cellulose. I just haven’t shown them here.)

With dirty electricity, the effectiveness of insulation is much better. 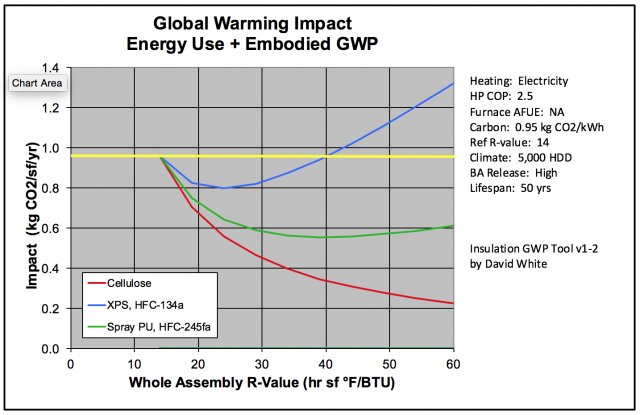 As in the previous two graphs, the cellulose curve keeps going down. The more you use, the more you decrease the global warming impact. With ccSPF and XPS, however, there’s a minimum and then a rise. For XPS, the sweet spot is at about R-25, so you could add about 2″ for another R-10. For ccSPF, the minimum is about R-40, so you could add 3 to 4 inches for another R-25 or so.

To stay below the yellow line, you’d want to limit XPS to about R-25, or 5″. You could go beyond R-60 total with ccSPF, but why would you want to? In my last article, I showed that unless you’re in a really severe climate, you could even achieve Passive House walls with R-50 or less.

This global warming calculator from David White is a useful tool. Rather than trying to calculate payback, it gives you the numbers for global warming impact. You can look at the curves for different insulation types and see where your sweet spot is. One thing I think would make it even better would be if it allowed you to look at the effect of an entire assembly instead of just individual insulation types with a reference R-value.

If you download my presentation slides, you’ll see these conclusions:

The big one there is in the middle: Avoid XPS. In terms of global warming impact due to the HFC-134a blowing agent, it’s the worst.

It’s also relatively easy to substitute another type of insulation for XPS. On walls, you can use mineral wool or polyisocyanurate. For slabs, you can use expanded polystyrene (EPS) or mineral wool. So just use something else.

Manufacturers are tight-lipped about what blowing agents they’re using these days. Some of the spray foam companies have switched over to the next generation blowing agents with much lower global warming potential. I don’t know of XPS manufacturers who have announced changes, but a rep from manufacturer did tell me they’re not using HFC-134a anymore. When I asked what they used, he said, “I can’t tell you that.”

In general, all insulation types can help mitigate the effects of climate change. Types with the bad blowing agents, however, have limits to their effectiveness. If you’re planning to use XPS or closed cell spray foam, the tool from David White can help you decide where to draw the line.