By Peter Yost | March 22, 2018
View Gallery 9 images
If you can make complete sense of this diagram, please let me know. The diagram illustrates the U.S. Army Corps of Engineers' CRD-C48-92 negative side waterproofing test.
Image Credit: Image #1: U.S. Army Corps of Engineers The building materials to make the concrete masonry unit (CMU) columns for testing.
Image Credit: Images #2 through #9: Peter Yost The completed columns. I built the columns upside-down so that I could waterproof them on all sides before inverting them to test by filling the hollow cores with water. The top of the filled UGL Drylok Extreme column. I added green food coloring to the water to make it easier to see where the column was leaking. This photo was taken after adding the third coat of UGL Drylok Extreme. It's still a bit hard to see (even after adding the green dye), but the leaking in the UGL Drylok Extreme column is occurring in the block groove and at the left hand bottom corner of the patio block. You can't see it from this photo, but on the back side, where the Fast Plug is, there is surprisingly no leaking with the third coat over the plug. Pressing a dry paper towel up against the Xypex column. The paper towel is wet, showing that there is very slight weeping through the Xypex Concentrate. Pressing a dry paper towel up against the Koster column. The paper towel is dry, proving that the two coats of Koster NB1 Grey, with the emulsion additive and the primer, worked.

Back in May 2017 I wrote a blog about negative side waterproofing (NSW). But I was still feeling troubled. The standardized test for NSW from the U.S. Army Corps of Engineers (“Standard Test Method for Water Permeability of Concrete”) is frankly really complicated; the schematic seems impossible to decipher (see the Image #1 at the right). Instead of using this test, could we do a real-world, Wingnut-style test for negative-side waterproofing?

I started by turning things inside out: I built hollow columns of masonry materials, waterproofing the outside and filling the hollow centers with water. Building brick hollow columns seemed too hard to start with, as did building forms for making my own hollow concrete columns. (I tried to find 12-inch diameter concrete pipe, but could not find any in my neck of the woods.) But for about $50, I bought enough mortar, 8″ by 8″ corner block, and patio pavers to build 4 three-course CMU columns (see Images #2 and #3, below).

I would like to thank technical folks like Roman Mahles at Koster USA and Les Faure at Xypex for their help on developing my Wingnut test. While I am in no way suggesting that they “blessed” or take responsibility for my testing, they did review my approach as a decent proxy for real-world performance. And both Koster USA and Xypex provided free waterproofing materials for my basement testing as well as the testing subsequently conducted during an educational session (“Waterproofing existing basements from the inside”) at the SeventhWave B4 conference this past February.

As a baseline, I filled my “control” concrete masonry unit (CMU) column with water. (See the video below.) No big surprise here: this column leaked like a sieve.

The uncoated CMU column is filled with water.

I then carefully followed the installation instructions for my three waterproofing treatments: UGL Drylok Extreme, Koster NB1 Grey, and Xypex Concentrate. After testing each of these coating treatments, I tested the manufacturer’s “active leak” patch product by drilling 5/8-inch holes at the bottom of each water-filled column.

The UGL Drylok Extreme system is guaranteed to work for up to 15 feet of head or water pressure and for up to 15 years. It is not a crystalline system — it’s more paint-like — although the manufacturer states that it does penetrate the concrete.

I applied two coats according to the installation instructions. (See the video below.)

A double-coating of UGL Drylok Extreme that still weeps water.

And because (as I explain below) I supplemented both the Koster and Xypex treatments beyond initial treatments, I also added a third coat to the UGL Drylok Extreme column, focusing on spots that leaked the first time around. (See Images #4 and #5, below.)

When I tried to plug an active leak with the Drylok Fast Plug hydraulic cement, I initially could not get the patch to hold against actively flowing water. (See the video below.)

I then tried the Fast Plug again with gentle seepage through the hole and got the plug to hold. I tested again after waiting for a set period of about 50 minutes. There still was leakage. (See the video below.)

After getting the Fast Plug to hold, water was still leaking.

When I described my CMU column test to Xypex, they immediately balked, saying that CMU blocks differ too much in composition to reliably water seal; there is not enough available calcium hydroxide — Ca(OH)2 — in the CMUs for the crystals to grow into the block. Their technical staff eventually agreed that the solution was to allow more time for the crystals to penetrate, and to delay the water test for two weeks.

Two weeks later, I still had very slow seepage down near the bottom of the Xypex CMU column (see Images #6 and #7, below). Xypex stated there just must not be enough available Ca(OH)2. They advised me to wet the block with a spray bottle and rub in Xypex Patch-n-Plug. That did the trick: no more leaks anywhere.

When I subsequently drilled the ½-inch hole in the Xypex column and applied their Patch-n-Plug to the active leak, the patch worked: I had no leaks anywhere, including at the drilled hole. (See the video below.)

Xypex Patch-n-Plug stops the active water leak. The Xpex Concentrate coating plus a skim rub coat of Patch-n-Plug had good results: the whole column is dry on the exterior.

When I described my CMU column test to Koster representatives, they expressed similar concerns as the representatives from Xypex, particularly regarding the possibility of not enough available Ca(OH)2 to get sufficient crystalline penetration into the CMU block. They asked that I do two things:

When I did all this, I was still getting just a bit of seepage at certain spots down low on the Koster CMU column. Koster staff assured me that it just takes longer for sufficient crystal growth in CMU block, so I should wait two weeks and then test again. That did the trick; after two weeks I had no water leaking anywhere on the Koster column (see Images #8 and #9, below).

When I drilled a hole and conducted the active leak test for the Koster CMU column, applying the KD2 Blitz Powder, the results were very similar to the Xypex test: the plug held and there were no water leaks anywhere. (See the video below).

In the chart below, I got the UGL Hydro-Lok costs right off of the Internet (Home Depot prices). The Koster USA and Xypex prices were provided by the manufacturers since their materials are exclusively retailed through qualifying distributors of concrete materials and accessories. 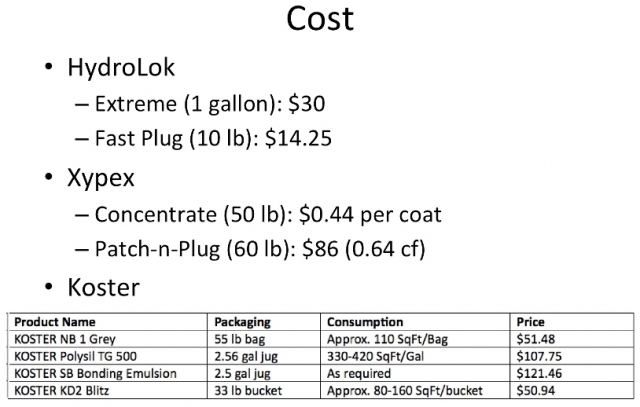 Installing Basement Waterproofing from the ‘Negative’ Side

How to Insulate a Basement Wall

In addition to acting as GBA’s technical director, Peter Yost is the Vice President for Technical Services at BuildingGreen in Brattleboro, Vermont. He has been building, researching, teaching, writing, and consulting on high-performance homes for more than twenty years. An experienced trainer and consultant, he’s been recognized as NAHB Educator of the Year. Do you have a building science puzzle? Contact Pete here. You can also sign up for BuildingGreen’s email newsletter to get a free report on insulation, as well as regular posts from Peter.