In cold weather, a puffy parka holds in your body heat. Insulation does the same thing for a house. The thicker the insulation, the better it works to reduce heat flow from the inside of a home to the outside during winter, and from outside to inside during summer.

The thermal barrier of a home should consist of a continuous layer of insulation on all sides—including the lowest floor, the exterior walls, and the ceiling or roof.

It takes more than just insulation to slow heat

Stopping air leaks is just as important as — maybe more important than — adding insulation. Unless builders prevent air from leaking through walls and ceilings, insulation alone won’t do much good. Not only are drafts uncomfortable, but air moving through insulated cavities can cut the efficiency of the insulation by as much as 50%.

THERMAL BRIDGING IS CONDUCTION IN ACTION

Building scientists call this phenomenon “thermal bridging” because the studs or rafters bridge the space between inside and outside the thermal envelope.

If you look for it, thermal bridging can sometimes be seen from either inside or outside.

Inside, it can cause a problem called ghosting, or cold stripes behind the drywall during winter. These cold stripes can encourage condensation that leads to the accumulation of dust particles on the drywall; eventually, visible vertical stripes may form. Outside, you can see the effect of thermal bridging in snow-melt patterns on roofs and drying patterns on walls.

A continuous layer of rigid foam installed on the inside or outside of a wall or roof drastically reduces thermal bridging through the framing.

Heat flows from hot to cold; it can’t be stopped, but it can be slowed

If we measure the rate at which heat flows through a building material or building assembly—for example, a wall or a roof—we can calculate a number (the R-value) to indicate its insulating ability. The higher a material’s R-value, the better the material is at resisting heat flow through conduction, convection, and radiation (outlined above). Insulation manufacturers report R-values determined by tests following ASTM standards (for example, ASTM C518).

Common insulation types and their R-values

Residential insulation materials have R-values that range from about 3 to 7 per inch. The amount of insulation installed in any given building assembly depends on the climate, the part of the house being insulated, the project budget, and local code requirements. 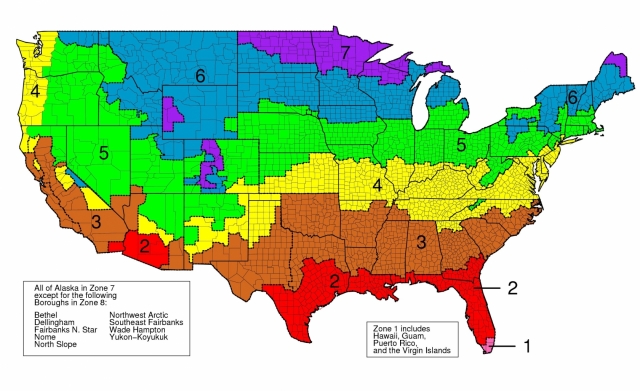 The U.S. Department of Energy has developed a list of recommended insulation levels for different climate zones. The climate zones are represented on the map (click to enlarge).

For more information on climate zones, see All About Climate Zones.

Houses heated by natural gas, fuel oil, or an electric heat pump should use the R-values set out by the DOE and listed below as a base. Because electric heat is relatively expensive, houses with electric resistance heat need more insulation than shown in the table below.

In some parts of the country, minimum code requirements for insulation already (or may soon) exceed these DOE recommendations. For example, the 2009 International Residential Code requires cold-climate builders to include a minimum of R-20 wall insulation and R-15 basement wall insulation.

DOE recommended R-values for various parts of a house

Some builders go further; for example, an Illinois home designed to meet the rigorous German Passivhaus standard is insulated to nearly R-60 on every side—even under the slab.

AIR AND MOISTURE ARE PART OF THE PICTURE

No matter what type of insulation you choose, it will perform poorly if installed in a house that is riddled with air leaks. Because many types of insulation (like loose fill and batts) work by trapping air, leaky walls, roofs, and floors mean poor thermal performance. For this reason, building scientists are fanatical about air-sealing. To get the most out of batts and blown insulation, every house needs an air barrier adjacent to or contiguous with the insulation layer.

Some types of insulation are fairly effective at stopping air infiltration. For example, when rigid foam is used as wall sheathing, it can be an effective barrier, as long as the seams are taped. Spray polyurethane foam creates a very effective air barrier.

But neither rigid foam nor spray foam addresses air leaks at the seams where different components meet, such as under the bottom plates of walls. An air barrier is only effective if all of these seams and intersections are addressed with gaskets, glues, or sealants.

Of all available insulation materials, fiberglass batts are the most permeable to air leakage—so permeable that fiberglass is used to make furnace air filters. Because it doesn’t restrict air flow, fiberglass is often singled out and derided for its poor performance.

Installation details for high-quality fiberglass batts have been incorporated into the insulation installation guidelines established by the home raters from the Residential Energy Services Network (RESNET).

For every location in a house, there are always several ways to create an effective air barrier. However, not all methods are equally easy to achieve. In many locations, including rim-joist areas, spray polyurethane foam is so much faster than alternative methods that its use has become almost universal among builders of high-performance homes.

Moisture can piggyback on air

There’s another benefit to stopping air: less moisture in roofs and walls. That’s because most moisture problems in walls and roofs are caused by moisture transported by air. Vapor diffusion is a much smaller problem.

Moisture can accumulate in a wall or ceiling when warm, humid interior air leaks through cracks in the shell. When this exfiltrating air encounters a cold surface—for example, OSB wall sheathing—the moisture in the air can condense into liquid and puddle in the wall cavity. The same thing can happen in summer, when warm, humid outdoor air leaks through cracks in the wall. If the home is air-conditioned, the moisture in this infiltrating air can condense when it reaches any cool surface—drywall, ductwork, etc. The best way to limit this type of moisture migration is to install an effective air barrier. If air isn’t leaking through cracks in a home’s walls and ceilings, the problem is nipped in the bud.

A Buyer’s Guide to Insulation

Wall R-Values That Tell it Like it Is — More information on whole-wall R-values.

Most places in North America aren’t a comfortable 67°F to 78°F. To stay comfortable, we heat and cool our houses. Insulation slows the flow of heat into or out of a house.

While heat can move three ways (conduction, convection, and radiation) it rarely moves in only one of them. Except in outer space, all three mechanisms are working together in varying degrees.

THERMAL BRIDGING IS CONDUCTION IN ACTION

AIR AND MOISTURE ARE PART OF THE PICTURE

Heat flows through materials by conduction

Conduction is the flow of heat energy by direct contact, through a single material or through materials that are touching.

When air or a liquid is heated, it expands, and therefore becomes less dense, so it rises. The rising warm air displaces cooler air, which sinks. When the motion is constant, it’s called a convective loop.

Woodstoves and windows cause convective loops by heating or cooling (respectively) the air closest to them.

Even in homes with airtight walls and ceilings, convective loops can feel like a cool draft and be uncomfortable to the people in the room.

Convective loops can occur inside poorly insulated wall cavities, too, degrading the performance of the insulation.

Radiation is the transfer of heat by electromagnetic waves that travel through a vacuum (like space) or air.

Radiation cannot pass through a solid object like plywood roof sheathing. When the sun shines on asphalt shingles, heat is transferred to the plywood sheathing by conduction. After the plywood has been warmed by conduction, it can radiate heat into the attic.

Radiant barriers are materials (for example, aluminum foil) with a low-emissivity (low-e) surface. Although radiant barriers have a few applications in residential construction—they are sometimes integrated with roof sheathing—they are rarely cost-effective when compared to conventional insulation options.

Some insulation types act as air barriers, while others act like air filters. If you choose an insulation that doesn’t stop air flow, it’s important to install an adjacent air barrier material.

Best to worst at stopping airflow:

Vapor permeability can be a good thing or a bad thing — vapor retarders slow wetting, but they also slow drying, which may be more important. As long as you design a roof, wall, or floor assembly with these concepts in mind, then almost any type of insulation can work. More on Enclosure Design.

Least to most vapor permeable:

For more on the vapor permeance of insulation materials, see the Building Materials Property Table at BuildingScience.com.

INSULATE OUTSIDE THE BOX

The thermal-bridging effect can be partially addressed by using rigid foam sheathing—usually 1 in. or 2 in. of XPS or polyisocyanurate. Even better are wall designs that place all the insulation—6 in. to 10 in. of rigid foam—outside the framing.

When insulation is outside the frame, framing materials stay warm and dry. When stud bays are not filled with insulation, the work of electricians and plumbers is greatly simplified.

Houses with foam sheathing should not include an interior polyethylene vapor retarder.