At the Potwine Passivhaus job site, contractors erected a tent to protect the fresh slab from cold temperatures

As they set out to build a single-family Passivhaus on Potwine Lane in Amherst, Massachusetts, Alexi Arango and LeeAnn Kim asked themselves, “Is it possible to live without burning fossil fuels?” One measure of success would be meeting their goal of net-zero energy performance. This is the third blog in a planned series.

February 24, 2014: Getting ready for the concrete truck

Wow! The builders saw an opening in the weather and scrambled to put up a tent. We must have had an accumulation of at least two feet of dense wet snow, yet they somehow shoveled all that snow off of the EPS foam and also plowed extensively around the perimeter.

The purpose of the tent is to keep the concrete warm enough so that it can solidify and be polished, and to protect it from the elements. The polishing process is done under water (to protect the crew from harmful dust particles), so the temperature must be kept well above freezing. The photo at the top of the page shows a large propane tank off to the right. We’re probably using more energy to keep that tent warm than will be used by the home for many years. Hopefully, everything will go smoothly with the concrete and it will be done soon. 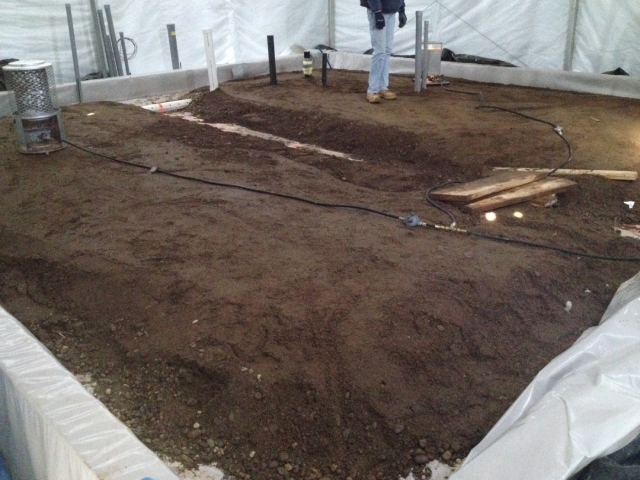 Here’s what it looks like inside the tent. The structural fill has just been compacted, burying the plumbing, conduits and radon mitigation piping. Now, rebar must be installed prior to pouring the concrete, which should happen tomorrow. 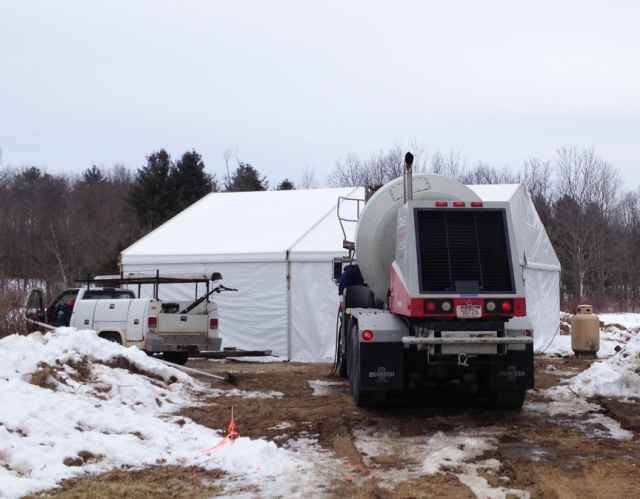 Suddenly, we’ve made major progress this week, despite the continued frigid temperatures! On Monday, the rebar was set into place and on Tuesday the concrete was poured. Everything seems to be going well, but not without some misunderstanding. 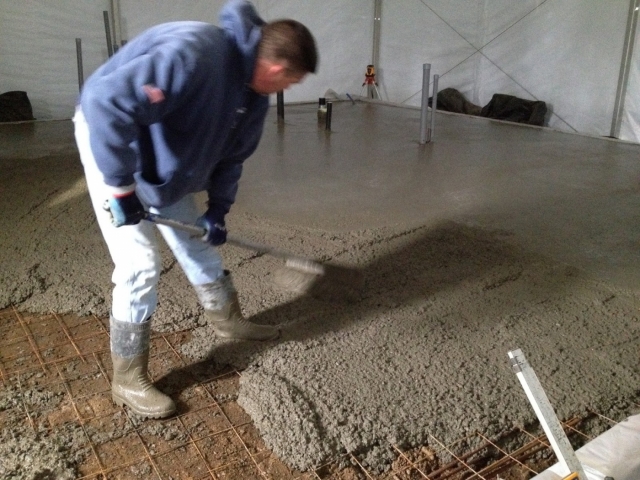 When I showed up, the first concrete truck had just finished pouring its portion of the concrete and the guys were spreading out the concrete and leveling it. The second truck was on its way, but I had to take off.

Power troweling the concrete all night 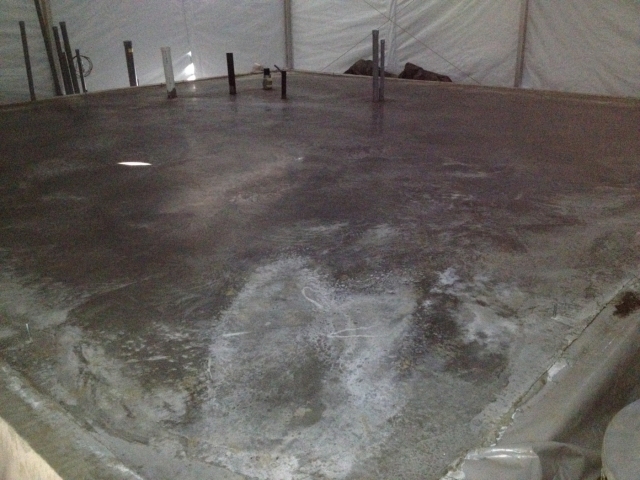 Here’s the floor in the morning. It looks smoother, but what’s all that white stuff?

Is this polished concrete?

The concrete process seems to be deviating from what I expected, and I’m not exactly sure what is going on.

Polished concrete has the advantage that it does not require chemical sealers or annual waxing, and apparently the look is better. As I understood it, the process for polished concrete follows these steps: 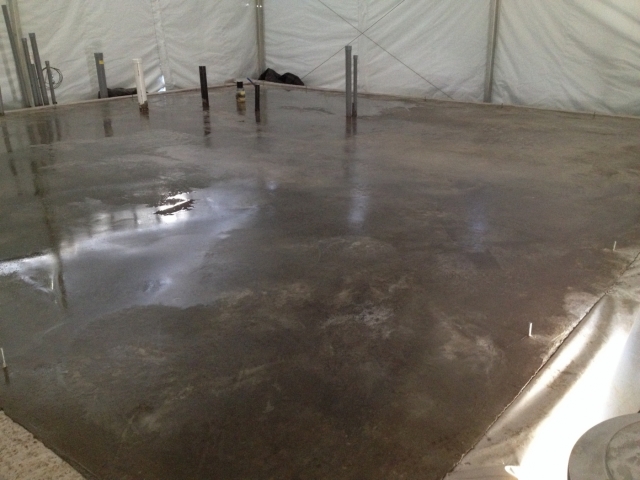 It looks like the concrete guy is actually going down a much different route, which might end up fine, but I’m worried about getting a floor that looks like a basement rather than something that suits a living room. One aspect that concerns me is the troweling process, described above. Apparently this process buries the aggregates under the surface of the concrete, giving a more homogenous appearance typical of a concrete floor. But the texture that the aggregates provide seems to be partly what makes polished concrete look so good. I’m crossing my fingers that it will turn out OK. I’m also wondering where the $5 per square foot premium went.

On Friday, after a couple of days of curing, the densifier was applied. I’m hoping that those scuff marks are not permanently engrained in the concrete. I guess there’s no turning back now. 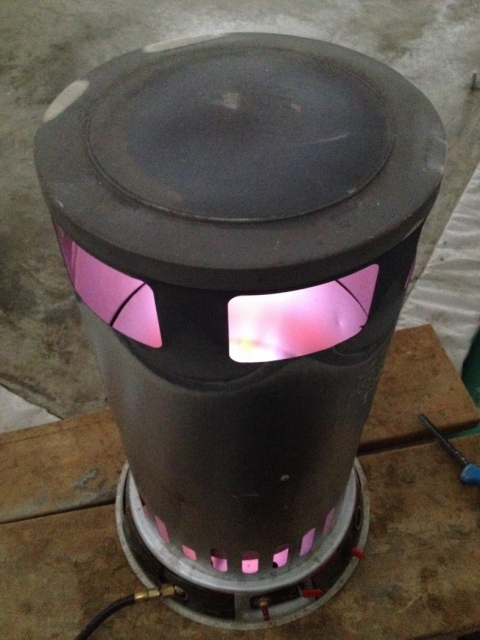 Here’s one of the two massive propane burners, running 24/7 for a week now to keep the concrete warm. 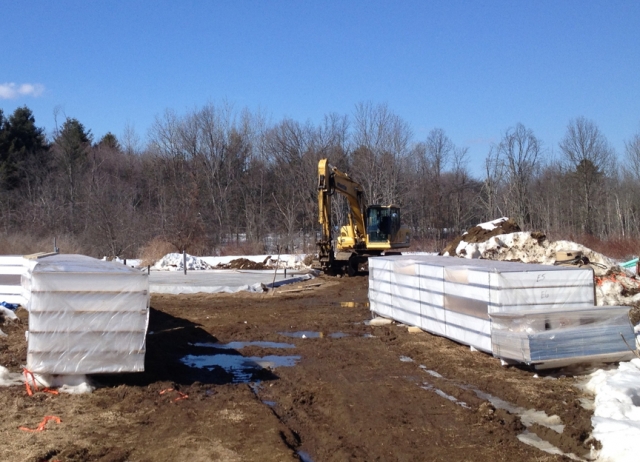 I got a text on Friday from my trusted neighbor-spy Jesse saying, “SIPs just rolled in!” I was out of town, but on Sunday I got to check them out — notice the stacked, thick white panels sitting on the ground. Also, the tent for the concrete came down, so I got to check out the concrete in the full sunlight. It looks good — a huge relief! 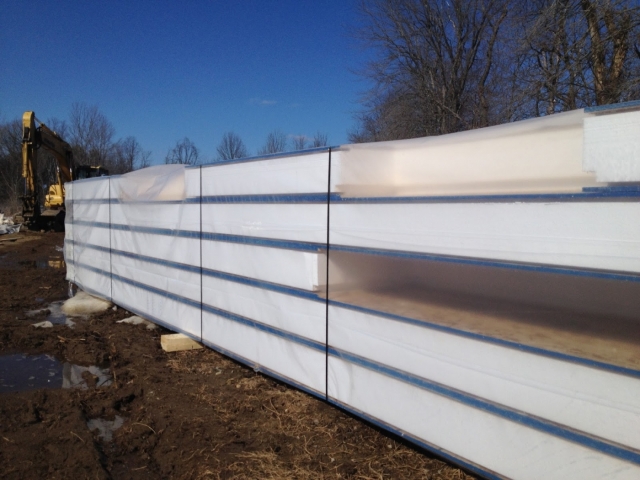 The image at left shows a stack of five structural insulated panels (SIPs), soon to be lifted by a crane and installed as the walls of the building. Let me tell you a little bit more about why these types of walls are such an important part of energy-efficient design.

You’ve probably seen a traditionally framed wall at a construction site — a web of 2×4 or 2×6 lumber going in every direction. Long horizontal 2-bys called plates are placed along the top and bottom of the wall. Vertical 2-bys called studs run the height of the wall, and little horizontal pieces, called nogging or blocking, are placed in between the studs. You have to be careful to lay out everything so that the window and door openings are taken into account and adequately reinforced. Plywood sheathing goes on the outside once the lumber is in place.

Following a much different process, our SIP walls are fabricated in a factory in Rhode Island, Branch River Plastics. The panels are huge. Each panel consists of a single 8-inch thick slab of EPS foam sandwiched between two long pieces of oriented strand board (OSB). Each panel is 4 feet wide and two stories tall. The foam and OSB are held together with urethane glue.

Fabricating the panels in an indoor setting provides a number of advantages: automated machinery is used to cut and laminate the panels quickly and precisely without generating much waste; the shape and layout of the panels are digitally uploaded to the manufacturing equipment without the need to interpret drawings on site; the quality of the panels can be tightly controlled and verified before shipping; and construction times are shorter because the panels can be made while the foundation is being constructed.

The end result is a monolithic panel that is airtight and superinsulated. The panels interlock, but you still have to seal the edges with tape. Although some builders use only the panels themselves as the walls, we will be adding 2×6 interior wall studs and blown-in fiberglass insulation to increase the R-value of the walls and to provide space for electrical wiring and plumbing.

In the video above, Matt O’Malia describes the process of installing SIPs at the GO Home.

After a worrying about the concrete floor last week, I was excited to see how the surface of the concrete turned out. I think it looks great – it has a nice matte finish to it, some interesting texture, and the color is pleasing. 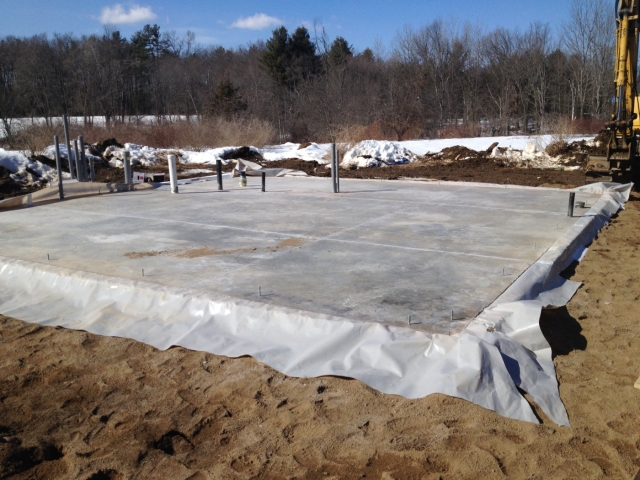 I guess it will add more of an industrial feel to the home rather than a fancy shiny granite look, which is cool.

This is better than polished concrete

There appear to be multiple definitions of “polished” concrete. The architect and builder told me that the actual grinding part of the polish – the part that gives it its mirror like shine – wasn’t planned for or included in the price. That step can be done later, if desired, but it would add a substantial amount to the cost of the floor. In the end, I think the builder went with the best of all possible options. It’s the economical option because the expensive grinding process was omitted. It’s the healthy option because we didn’t use a chemical sealer. Plus, it’s the durable option because we used a densifier to harden the concrete. 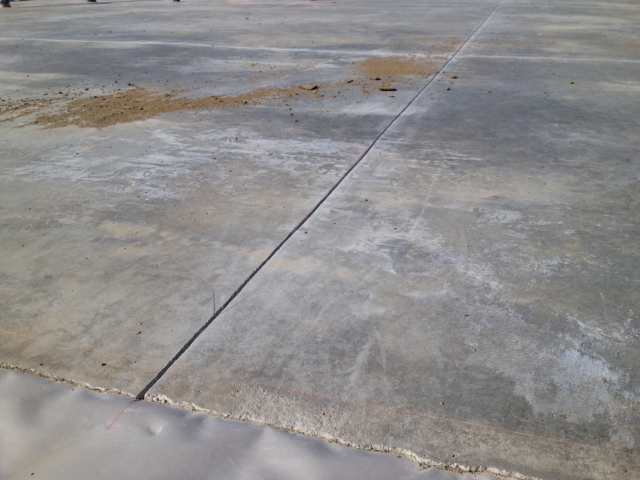 This photo is a closeup of the concrete control joint, a cut in the concrete that promotes cracking underneath the joint, instead of along the surface. You can also get a better sense for the texture of the surface — it’s pretty smooth to the touch. I’m not sure what part of the texture will wipe off when it’s cleaned, but I’m feeling good about it, regardless. 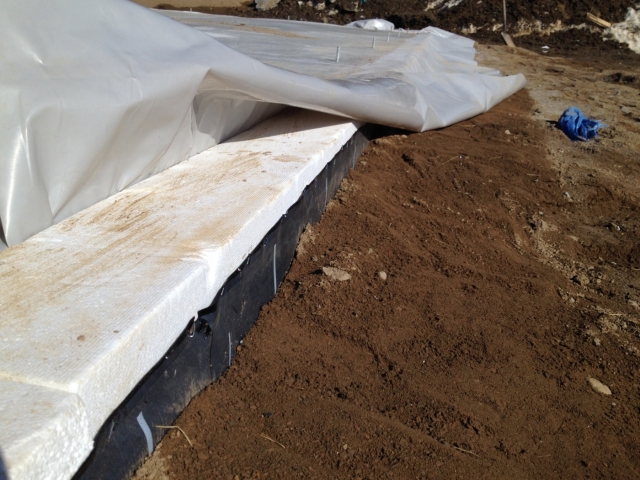 Backfilled around the perimeter

Here’s an image of the EPS foam, having been lined with a black covering — the Ice and Water Shield — and backfilled with dirt. Buried under the dirt is another EPS panel, a horizontal “wing” that serves to insulate the ground under the insulation from frost. The gray plastic is the polyethylene vapor barrier that forms a continuous seal underneath the concrete.