As they set out to build a single-family Passivhaus on Potwine Lane in Amherst, Massachusetts, Alexi Arango and LeeAnn Kim asked themselves, “Is it possible to live without burning fossil fuels?” One measure of success would be meeting their goal of net-zero energy performance. This is the ninth blog in a series.

Back from my trip to Korea and Japan, I have three weeks of exciting work on the house to catch you up on. The ventilation system went in, although we ran into some issues about where to put some of the vents.

When you seal up the exterior shell of the building, it makes for a more comfortable home in addition to saving energy. When you open the front door, cold air can’t rush in — it has nowhere to go. There are no cold drafts throughout the house because cold air isn’t leaking in anywhere.

If you build your house according to the Passivhaus standard, it should take 1 hour 40 minutes for all of the air in the building to leak out and be replaced by new air when the house is depressurized to 50 Pascals with respect to the outdoors. (This is equivalent to 0.6 air changes per hour at 50 Pascals. It’s not exactly clear to me why this particular number is the target.) A typical home will leak out all of its air in 30 minutes, equivalent to leaving the front door wide open!

You are getting sleepy and sickly

People need fresh air, otherwise they’ll start to feel a little dizzy and tired due to the build up of CO2 and lack of oxygen. At 600 ppm of CO2, air starts to feel stuffy. At 1000 ppm, you’ll start to feel drowsy. Even measurements of typically constructed homes find that CO2 concentrations in the bedrooms at night with the windows closed will often reach over 2000 ppm!

The more tightly sealed the house, the worse the situation gets. Furthermore, toxic gases offgasing from glues, coatings, paints, and plastics will cause long-term health problems if they are allowed to build up in the home.

The amazing ventilator brings in fresh air without wasting energy

A ventilation system is designed to address this problem, bringing in fresh air to every room while miraculously not wasting much energy. It’s ingenious and surprisingly simple — probably one of the coolest energy-saving ideas ever!

The heart of the system is a type of heat exchanger (shown in the image above) which takes cold air from outside and pulls it through tiny pores. Each pore is surrounded by another set of pores flowing warm air from inside in the opposite direction. As the cold air passes by the warm air, almost all of the heat energy (up to 95%) transfers from the warm air to the cold air. It’s easy to think that the temperature of the two air flows might equilibrate to some intermediate temperature, but that’s not what happens. 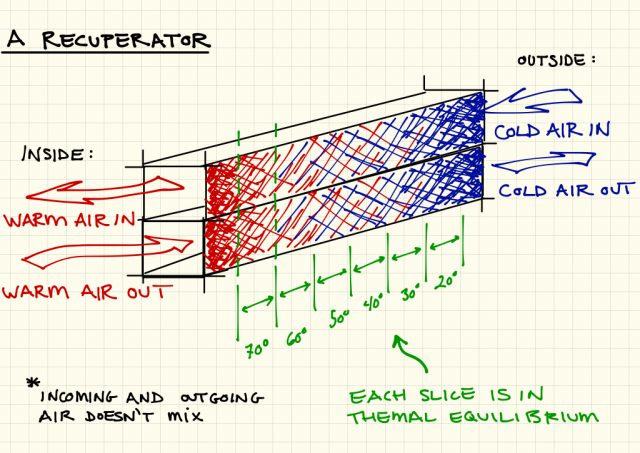 The secret behind how it works

Imagine two tubes, side by side, shown at left. One has cold air entering from outside, one has warm air entering from inside. Since the two tubes are in contact, they will have pretty much the same temperature at each cross section along the tubes, warmer near the inside and cooler near the outside. As air passes through the tubes, heat is transferred between the tubes in order to maintain the temperature profile along the length of both tubes. Notice how incoming cold air is heated up to room temperature and outgoing warm air is cooled down to the outside temperature. The efficiency of this process can be very high as long as the temperature difference between the two tubes is small and the thermal conductivity of the tubes is high. The same process runs in reverse in the summer. 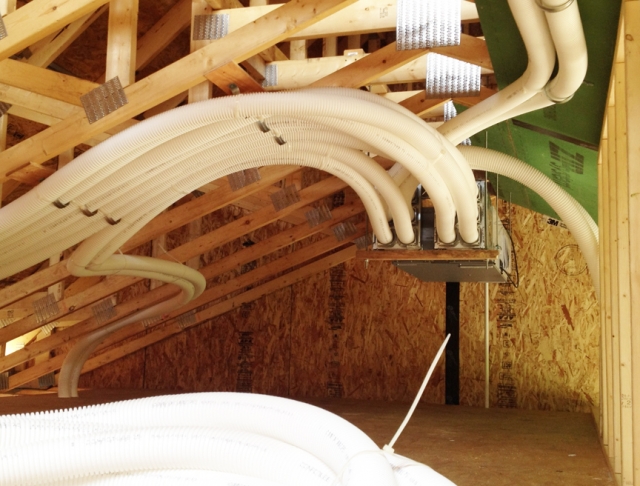 The actual ventilator, called a heat-recovery ventilator (HRV), looks like a big rectangular box with squid-like flexible ducts going everywhere. It’s installed in the attic space and the ducts are routed down to each room. The installation seemed to be pretty quick and easy — it took two guys about two days, although we ran into an issue. 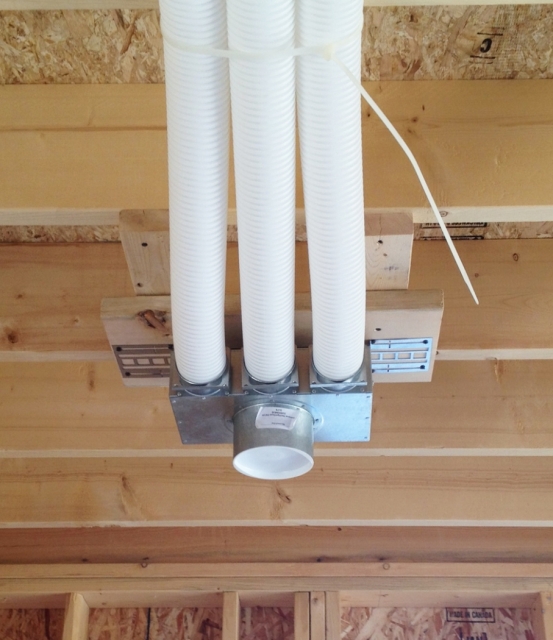 Where should the ventilation vents go?

At left is an image of the exhaust vent in the kitchen. The architect and Zehnder seemed to have two different philosophies about where each vent should go. The architect intended to place exhaust vents in the kitchen and the two bathrooms, and to place supply vents in the bedrooms and the main living area. Zehnder seemed to think that supply vents weren’t needed in the main living area because the supply air from the upstairs bedrooms would filter downstairs.

On one hand, the architect’s configuration seems like a better idea because the living area is a large space and it would be nice to have fresh air piped there directly. On the other hand, the bedrooms are the locations where CO2 buildup will be the greatest — small spaces, closed off all night, with people breathing inside — and therefore would benefit from as much fresh air as possible.

Three weeks later, we still appear to be at an impasse.