At the Potwine Passivhaus, the high costs associated with a long driveway raise the question: Would an off-grid PV system have been cheaper?

As they set out to build a single-family Passivhaus on Potwine Lane in Amherst, Massachusetts, Alexi Arango and LeeAnn Kim asked themselves, “Is it possible to live without burning fossil fuels?” One measure of success would be meeting their goal of net-zero energy performance. This is the eighth blog in a series.

Work on the driveway continued this week, preventing much of anything else from happening. I realized that I’m having regrets about the whole driveway operation. But, on a positive note, the placement of the window locations appears to have turned out perfectly.

I should have gone off-grid

The driveway work is a colossal operation that has been taking more than twice as long as expected. The exposed electrical, phone, and cable conduit are laid down in the trench shown in the photo above. They will be covered up next week. Sewer and water lines have already been put down and buried. The total area that was dug up covered the entire width of the original driveway, a gravel driveway that was perfectly usable as is. At $50,000, it’s the single most expensive part of the construction.

Given the cost of the driveway, off-grid electricity might not be as far-fetched as you might think. Right now, the cost of batteries for off-grid solar is not subsidized and is not competitive economically. However, battery costs are falling rapidly and their performance has been improving steadily. Remember when your laptop lasted only two hours on a charge? Now, thin and lightweight laptops last all day on a single charge. According to one group, off-grid solar photovoltaics plus battery storage will be cheaper than grid electricity in five years in the Northeast.

It is possible that I would have needed to double the solar array size in order to account for peak demand, but still… I had no idea it would be so close.

A great thing happened when I was showing my neighbor, Nancy, the house for the first time. 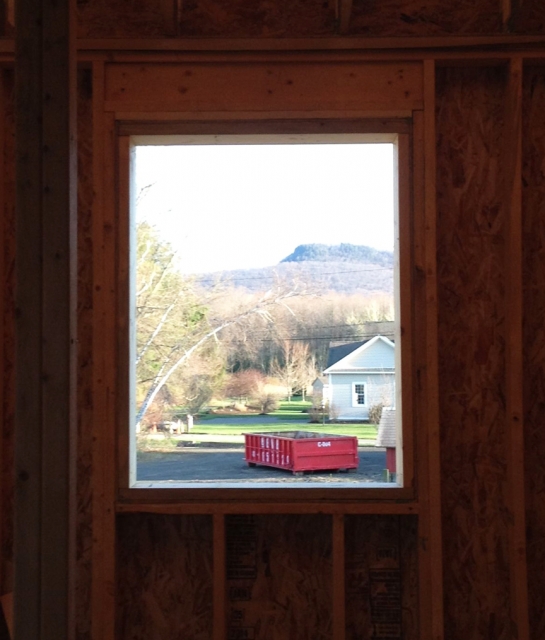 As she walked up the steps, she exclaimed: “Oh, look at the mountain!” I was beaming inside. Nancy had no idea how much thought and energy went into to crafting the top of the stairway. I can’t believe it actually worked as planned.

The most expensive part of the entire project – the essentially unnecessary driveway – is almost done. 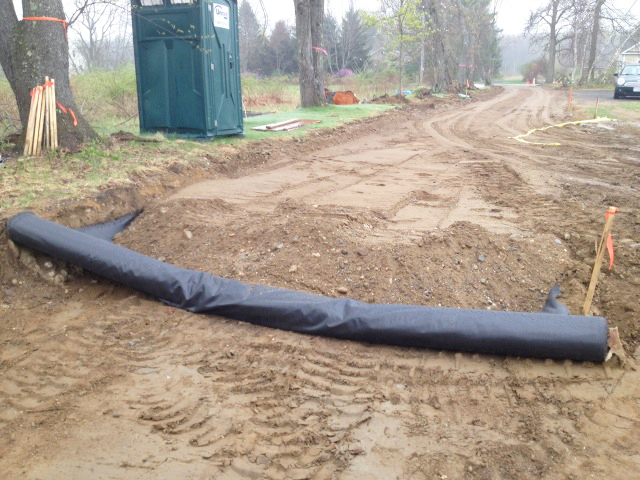 Normally, you want to complete the driveway first, before embarking on construction, but our project got off to a late start and the winter prevented us from doing driveway work until now.

At left, a sheet of fabric is put down to separate the bottom layer of dirt from the top layer of “gravel” – that’s what the guys call it even though it looks like dirt to me. I suppose keeping the two layers separate helps stabilize the driveway. 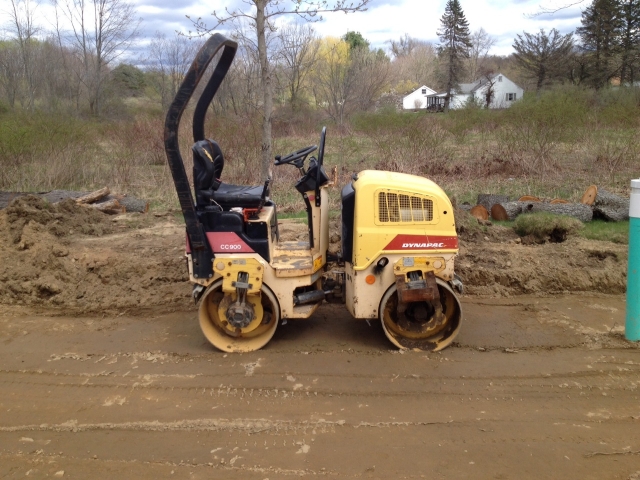 The tiniest steamroller in the world is compacting the gravel — it’s adorable. After construction is complete, a final layer of “TRG” (trap rock gravel) will be placed on top of the dirt. The TRG consists of small stones and sand that compacts well and can be plowed in the winter.

Now that the dirt is compacted around the home, delivery trucks don’t have to worry about getting stuck in the mud. My only concern is that I want a vegetable garden in front of the house and I’m worried that compacting the soil will make the ground less amenable to cultivation. The driveway guys didn’t seem to think it was an issue. 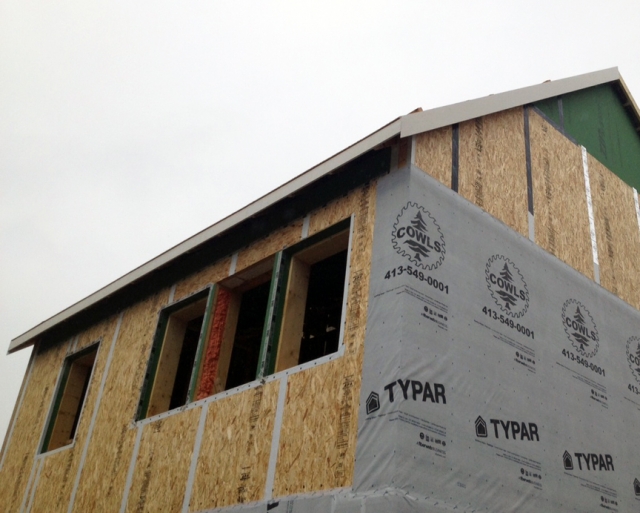 Work on the roof trim

I’m not sure how he got up there, but somehow Don got started on the roof trim – see the white boards along the edge of the roof – without scaffolding or a ladder. When I asked him how he did it, he said: “I’m a monkey.” Next week, the metal standing-seam roof will go up and Don is eager to borrow the scaffolding that the roofers will put up. 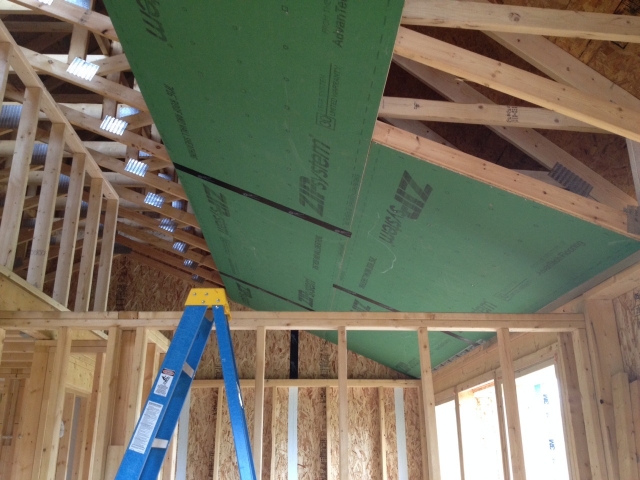 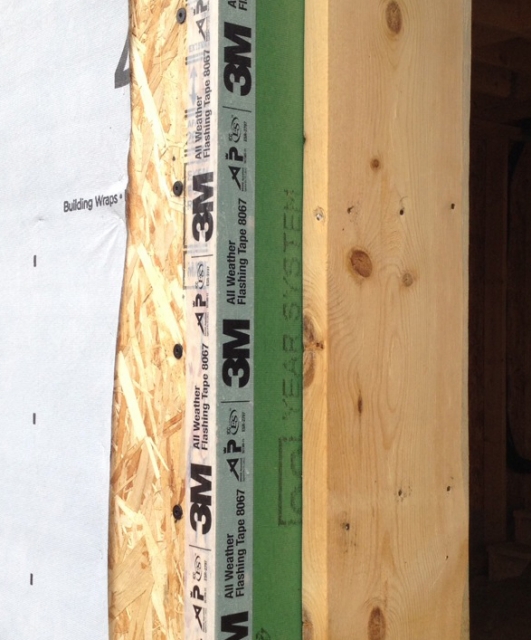 A delicate process, reminiscent of wrapping a Christmas present, is required to seal the moisture barrier around the window openings. First, the air barrier is taped at the edge between the window frame sheathing and the SIP OSB, shown at left. 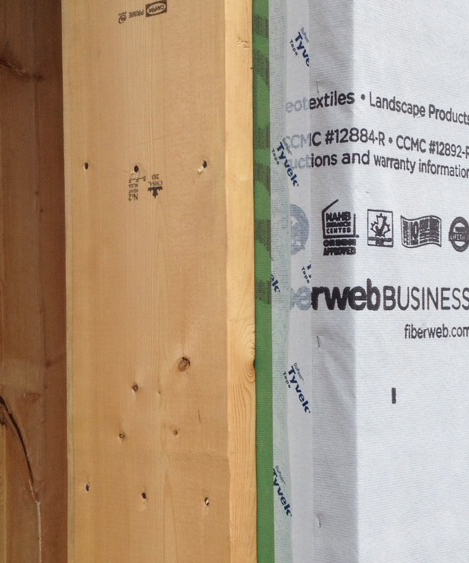 Second, the housewrap is taped to the window frame sheathing. 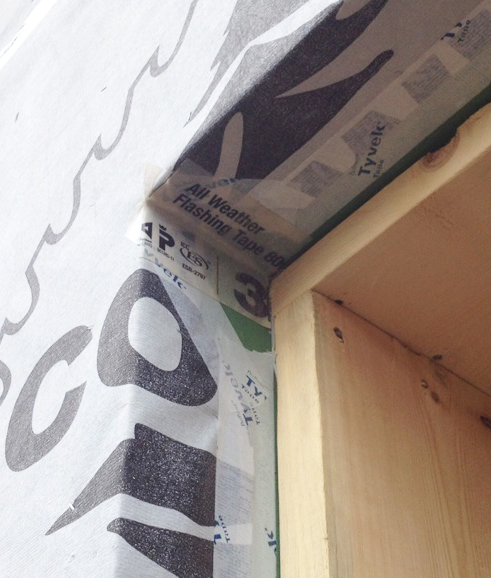 Getting the edges right is always the tricky part. An extra piece of tape goes right at the corner, running horizontally along the inside crease of the window frame.

I’ll talk more about the heat pump later when it actually gets installed, but for now, here’s a quick overview.

The heat pump provides both space heating and air conditioning. We’ve chosen a minisplit, dual-zone, ductless model, meaning that there is an outdoor unit (a condenser) and two wall mounted indoor units (the evaporator cassettes) connected by two refrigerant lines (a gas line and a liquid line). This is different from central air conditioning or forced-air heating where a central unit in the basement blows air through ducts to each room.

How does a heat pump work?

It’s a complicated process — a miracle of science — and you need to know a certain amount of thermodynamics to really understand it, but here’s how a heat pump (as well as your air conditioner and your refrigerator) works, in a nutshell. 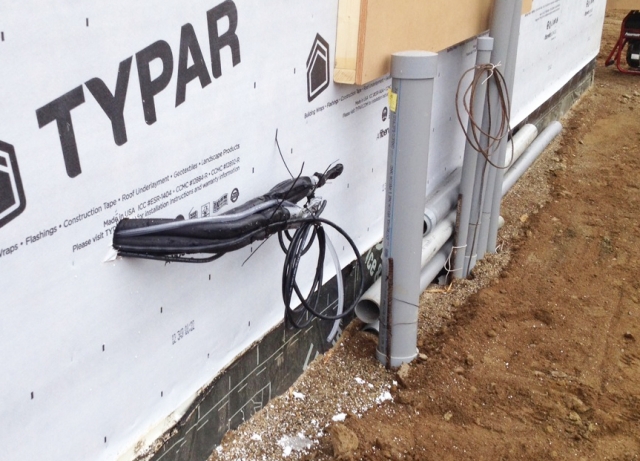 Here’s where the outdoor unit will go once the siding is finished. Those bunches of tubing puncturing the wall are the refrigerant lines. 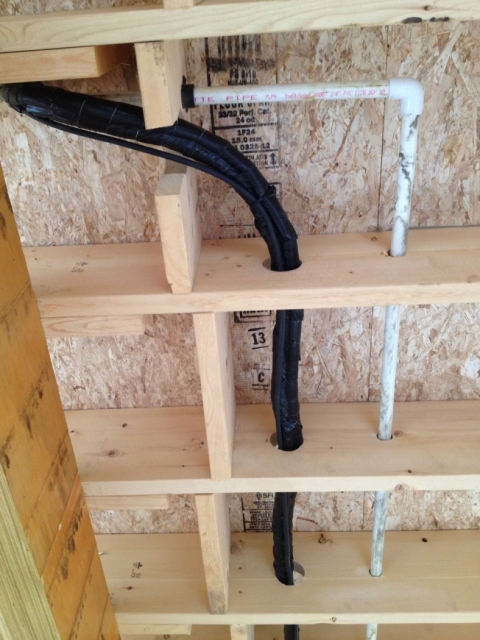 Inside, the tubing snakes through the walls to the evaporator unit. A water line allows condensed water to drain away. Notice how much simpler it is to install these lines than it would be to install all of the ductwork for a central heating or air conditioning unit.

Why don’t we need heat in every room?

The home is so well insulated and so tightly sealed that the temperature will be even throughout the entire house. You just need to add a bit of hot air at one location and the heat will eventually propagate everywhere. We have one cassette upstairs for cooling in the summer and one unit downstairs for heating in the winter. The thermostat will be set to a given temperature and a minimal amount of energy will be required to keep the temperature constant.

A great feature of these heat pumps is that they can run at extremely low settings, quietly trickling in the tiniest amount of heat without having to noisily cycle on and off like a traditional system.