As they set out to build a single-family Passivhaus on Potwine Lane in Amherst, Massachusetts, Alexi Arango and LeeAnn Kim asked themselves, “Is it possible to live without burning fossil fuels?” One measure of success would be meeting their goal of net-zero energy performance. This is the tenth blog in a series.

Since I was out of town for two weeks, I missed out on the whole window installation process, which was a major bummer. Kathy stopped by after Week 20 and sent me some pictures of the windows, which helped prevent me from being eaten alive with curiosity.

Kneer-SÃ¼dfenster is a German window company that’s been around since 1932. Their windows are custom sized, Passivhaus-certified, triple-pane, high quality, and — surprisingly — cheaper than Marvin double-pane windows.

Since Integrity hadn’t installed Kneer-SÃ¼dfenster windows in the past, GO Logic sent down one of their carpenters from Maine to give a demo installation and to inspect the windows after their long trip from Germany. The guys reported that the installation was easy. Most of the windows were in place after three days of work. 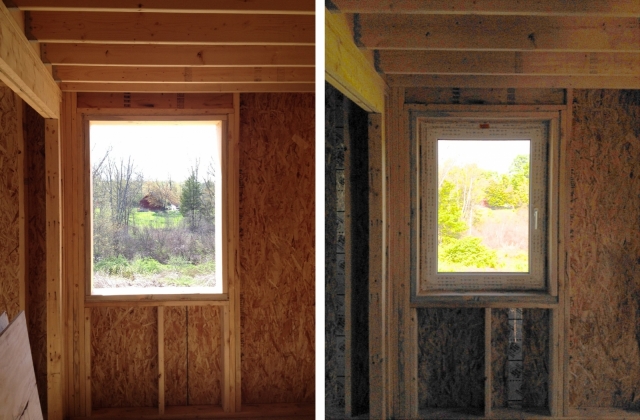 Oh no! Check out how much the actual window area has shrunk! Back when the SIPs were installed, the window openings were already squeezing me in. Now I feel like I’m on an airplane looking through a porthole.

I guess it’s the price we pay for energy efficiency — windows lose a lot of heat, and even the south-facing windows upstairs have to be kept small to avoid over-heating on sunny winter days. The small size of the windows upstairs is probably the biggest — or maybe the only — serious sacrifice that the Passivhaus standard has brought, but it’s still hard to swallow. 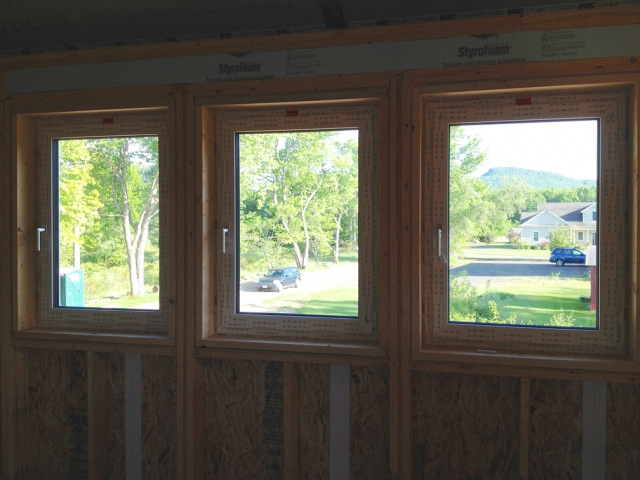 The master bedroom widows, however, work well at this size. The three widows let in a good amount of light and allow a nice view of the hillside, but still give you a bit of privacy.

Once you walk up to these windows, you notice how exquisite they are. The handles make you feel like you’re getting into a Mercedes. The feel is solid. The look is simple and elegant. The clicking and latching sound of the locking mechanism is reminiscent of a car door unlocking. There’s even a whooshing sound as the seal is broken as the window opens. 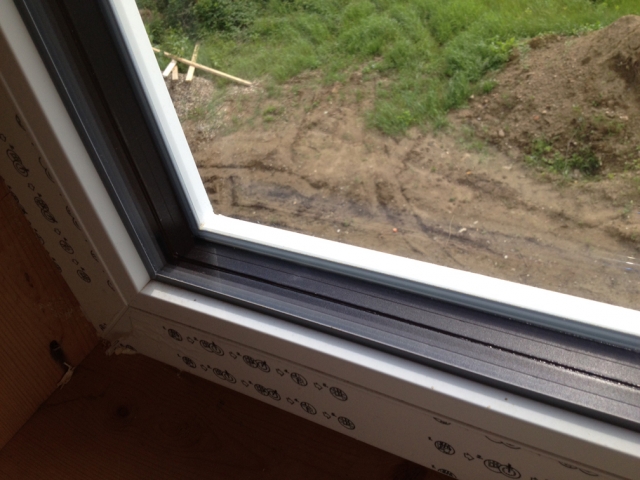 The thickness and heftiness of the window is ridiculous. It feels more like you are opening the door to a vault at the bank than a window. The triple-paned glass must be almost two inches thick! 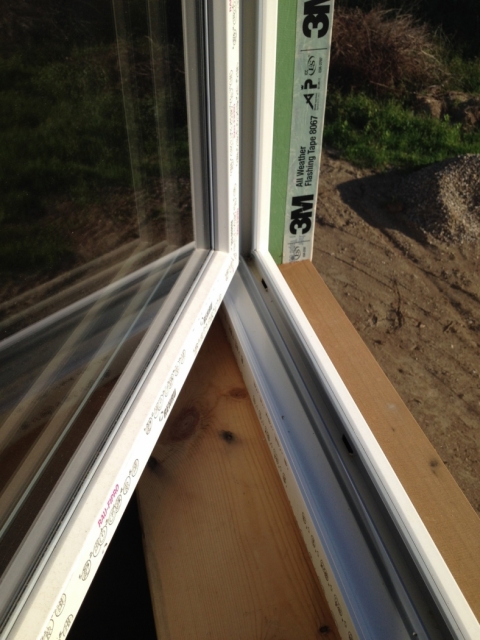 There are three levels of rubber seals to ensure that the window is airtight, in addition to a bomb-proof locking mechanism that locks at multiple points all around the perimeter. 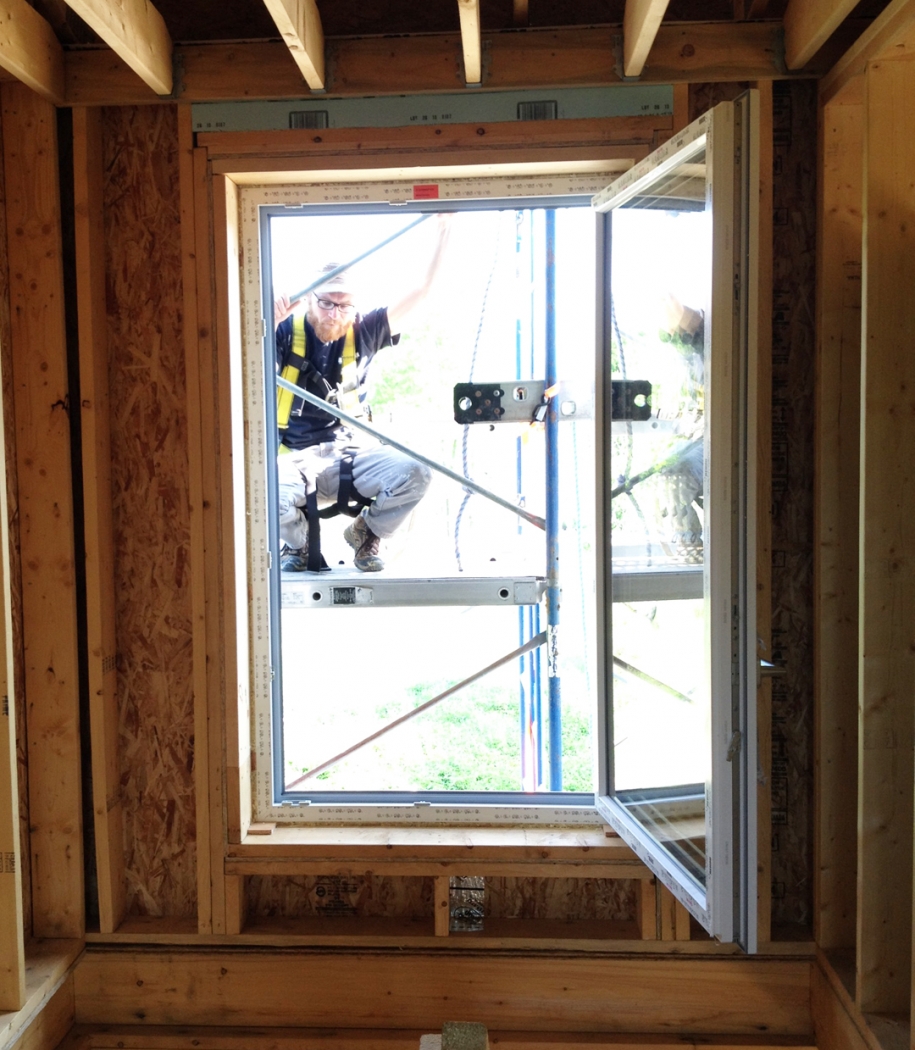 Tilt and turn is fabulous

Most windows in the U.S. either slide up or sideways, or have that little ridiculous crank handle at the bottom that is impossible to use. Tilt and turn windows, popular in Europe, open inward like a door (see photo at right). It’s easy, convenient and satisfying — you get a full wide-open window that brings in a ton of fresh air. You can pop your whole body out the windows for a good look around. You can clean the outside of the glass and install the bug screen from the inside. 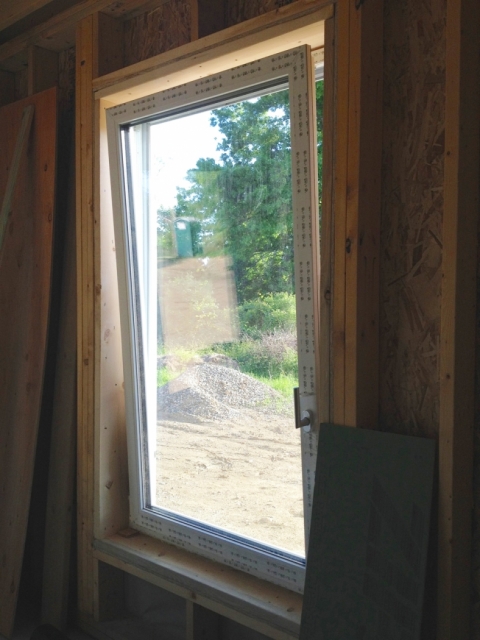 For just a little bit of fresh air, turning the handle upward allows you to open the window from the top down — the tilt position. This is great for when you don’t want to deal with a wide-open window or when it’s raining outside. 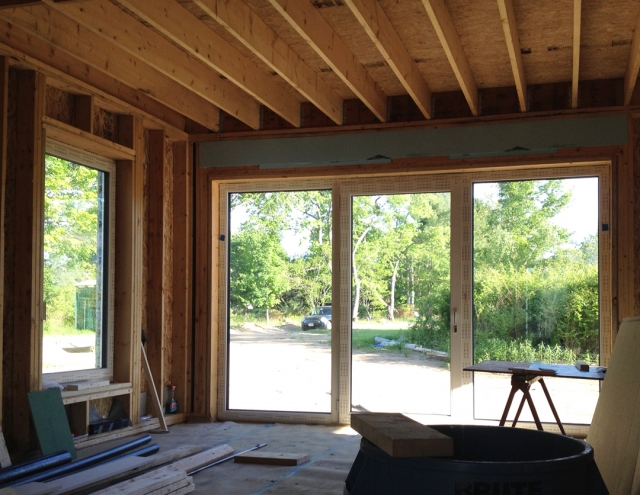 Not so happy about the dining room windows

At the last minute, GO Logic panicked about meeting the Passivhaus heating goal of 15 kWh/m2 per year. They decided to widen the set of three large downstairs windows which let in a large chunk of the solar heat. It made sense to increase their size, but the dining room area now feels much more wide open than I originally imagined. The inside feels too exposed to the street and the window layout feels somehow out of balance. From the outside, the vertical symmetry between the upstairs windows and the downstairs windows is awkwardly upset. 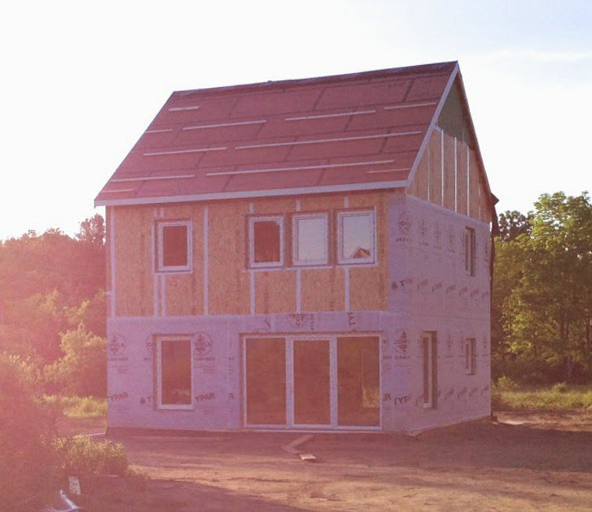 I might just need to calibrate myself to the new look, but I can’t help but feel that this scenario illustrates something broken with the Passivhaus design process. The last-minute redesign probably resulted in a tiny reduction of the actual heat load — just enough to bring us under the 15 kWh/m2·year target — but it forced a number of errors and difficult compromises to an otherwise well-planned project. I don’t have an easy prescription for avoiding this situation in the future, but there must be a better way.

Important things to know about windows

Visible Transmittance (VT) is the percent of visible light that passes through the window. A higher VT is generally better, unless you want to avoid direct sunlight or glare. Lower VT windows will look tinted.

Solar Heat Gain Coefficient (SHGC) is similar to VT, but for the whole solar spectrum. One amazing fact about the solar spectrum is that heat itself is radiated in an identical way to light — as photons. Radiant heat is light; we just can’t see it with our eyes. In fact, most of the energy in the solar spectrum is in the form of invisible heat photons. SHGC describes the fraction of the total solar spectrum (heat plus visible light, plus other stuff) that penetrates through the window. Consider two similar windows that both look completely transparent to the eye. One might allow a lot of heat photons to pass through — giving a high SHGC. The other might fewer heat photons to pass through — giving a low SHGC. A high SHGC (around 0.7) is great for south-facing windows because they let in a lot of heat.