How to Insulate a Raised Floor

When there’s not enough room under the building to work, how can a continuous layer of insulation be installed?

Peter Danube is planning to build a detached workshop in northern Delaware, a Climate Zone 4 locale. The 20-by-32-foot building will be constructed on concrete piers, rather than on a slab or over a crawlspace, and therein lies the dilemma. How should he insulate the floor?

“It is important that the shop have a warm wood floor and the project has to be something I can build myself,” Danube writes in a Q&A post. “I would like the building’s heating and cooling to be as efficient as possible and would like to apply best practices in building efficiency given this situation. ”

Danube explains that the bottom of the floor assembly will be too close to the sloping ground underneath the shop to allow him to insulate from below. Instead, as the drawing at the top of this column shows, he wants to do the job from above, after the floor has been framed. First, he would install pieces of 1/2-inch pressure-treated plywood between the joists. Next, mineral wool between the joists; and finally, a continuous layer of 1 1/2-inch-thick foam on top of the joists to slow down thermal bridging. The shop floor will be made from tongue-and-groove OSB 3/4 inch thick.

A Green Building Workshop in Nebraska

In Vermont, an Energy Retrofit Workshop

An alternative would be to add 2×4 sleepers across the tops of the joists on 24-inch centers and fill the voids in between with extruded polystyrene (XPS) foam. The floor could be laid over the 2x4s.

“The above plan (and even the alternative) will allow me to set my joists and build everything from the top as I do not have access to the underside of the joists for attaching foam or plywood directly,” he says. “Over what little space there is available under the building, I intend to put down a permeable fabric on the ground and cover that with a few inches of gravel.”

Is this plan Danube’s best option? That’s the topic for this Q&A Spotlight.

The foam needs to go on the bottom

While Malcolm Taylor acknowledges that working that close to grade is a pain in the neck, he also warns Danube that his initial approach won’t be successful.

“Foam doesn’t have sufficient compression strength to be placed over the joists without a subfloor underneath,” Taylor says. “It will crush. Unfortunately, the place for the continuous foam is on the underside, where you don’t have easy access.”

Taylor’s solution is to build the floor upside down in sections, then flip them over to create the finished floor system. The continuous layer of foam would be on the bottom of the assembly,  protected by plywood.

Sharpening his pencil, Danube figures each of those four sections would weigh about 1,000 lb., and flipping them over would require “several friends and some frosty beverages.” He produces a modified construction sketch (see the image below) that incorporates Taylor’s suggestions and breaks the floor into eight 500-lb. pieces to make them easier to handle. 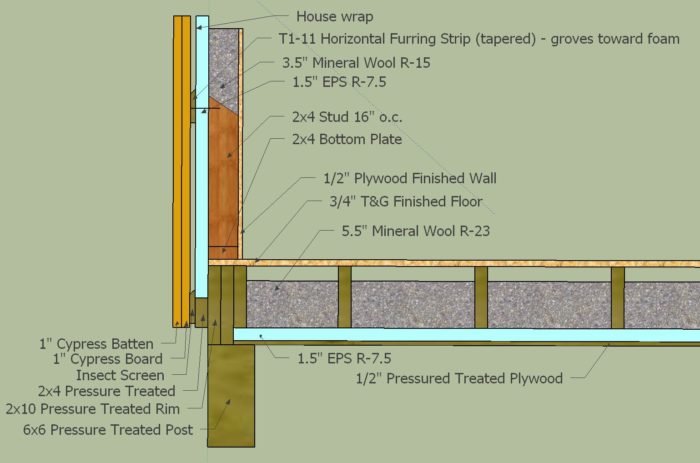 This is the wrong approach

“I have a lot of respect for Malcolm’s experience,” writes GBA Editor Martin Holladay, “but I don’t recommend the approach he’s endorsing. There are a lot of problems with wood-framed buildings with floor joists close to grade. Buildability is only one of them. You need access under your joists for a variety of reasons.”

Holladay has two other bones to pick with the plan. First, Danube should not place a permeable fabric over the ground under the shop. It should, instead, be a vapor barrier — perhaps EPDM roofing, a pond liner, or polyethylene sheeting. Second, placing the entrance to the shop on the uphill side of the building so that it’s at grade level is a mistake because it puts earth in contact with the floor framing.

He could raise the level of the entrance a foot or so and build a long wheelchair ramp up to the entrance, but even this doesn’t seem like a good idea. “Here’s my rule,” he says. “Only build a crawlspace if it is high enough for a human being to access for maintenance purposes. If you don’t have enough room for an adequate crawlspace, you need a slab.”

A framed floor close to grade is always a second-best option, Taylor replies, adding, “However, the downsides are mitigated in outbuildings which typically don’t include plumbing or mechanical systems, and if you decide to build that way, the method I describe yields good results.”

A way to keep water away from the entrance

Given Holladay’s comments about keeping earth away from the floor framing near the entrance, Danube says that he may build an overhang from the main roof and frame a 10-foot-deep deck below it. The idea, he says, is that replacing deck parts would be easier than floor parts if contact with soil causes problems.

He also plans to rest the floor sections on girders, and thereby gain a little more room under the building than he had originally thought. There will be no plumbing or wiring under the shop, so he does not foresee the need to crawl around under the floor.

“I like your idea of upping the ground cover to a pond liner under the floor,” he says. “That eases several concerns. I will probably run buried perforated pipe across the high side of the slope ahead of the building to deal with any water that might one day come through this part of my yard. I would probably also tie my downspouts into such a drain.”

Reconsider your choice of foam

Another concern is Danube’s choice of rigid foam. XPS is manufactured with a blowing agent with a high global-warming potential, Holladay points out, while expanded polystyrene (EPS) is not. Although XPS has a slightly higher R-value per inch than does EPS, its chemical makeup often makes it a second choice among green builders.

The trouble is, Danube has a ready supply of XPS close to home while EPS is a special order item. Further, a change in the formula for XPS Danube has read about will make this type of rigid foam environmentally friendlier by 2020. If he delays construction, that would be an option.

Dana Dorsett points Danube to a source of reclaimed EPS and polyisocyanurate not too far away from where he lives. Repurposed Materials seems to have a good inventory of polyiso in stock, which could be used in the shop walls, he says.

“There are many foam reclaimers out there, but it takes some sleuthing to figure out where they are in your local area,” Dorsett adds. One company to check with is Nationwide Foam.

Holladay has already weighed in on the choice of a ground cover under the shop (a vapor-impermeable barrier), but Peter Engle disagrees.

He suggests grading and raking the soil before putting down the ground cover. A smooth, slightly crowned surface will shed water to the outside of the building.

Holladay still thinks Danube would get a better night’s sleep if an impermeable material separated the floor system from moisture-retaining soil.

Walter Ahlgrim has two more thoughts on the project: Danube might reconsider his use of wood framing for the floor altogether and go with concrete instead, and make the building two full stories instead of the original plan of 1 1/2.

Today’s formulations for pressure-treated wood haven’t been around for very long, he says. “We have no history to tell us how the new formulas will hold up in 50 or 100 years,” he says. “Some of your wood will be very close to the ground. Consider what would be necessary to replace that wood.”

His objections to 1 1/2-story buildings have to do with the difficulty of air sealing the ceiling properly. Although Danube faces some deed restrictions on height, Ahlgrim suspects the plans could be tweaked enough to satisfy local building officials.

Our expert weighs in

The part of the structure I am most concerned about is the uphill side. Water management details there are more important than whether the sloped grade underneath your structure includes a vapor-permeable or vapor-impermeable barrier. On a similar project we used metal grating to transition from finished grade to the structure for a fully draining clean break.

In terms of which rigid insulation to choose, there’s excellent GBA guidance here. For EPS, there is a really wide range of materials that various materials suppliers carry. Here is a link to an EPS industry document with a useful summary and properties table:  Compressive Strength of EPS.

Standard XPS has a compressive strength of 25 psi, almost certainly adequate for this workshop. But if compressive strength is a big concern (particularly if you wanted to create a thermal break between the structure and each concrete pier), there is always Foamglas, rated at 90 psi.

Any exposed rigid foam (except for Foamglas) should be wrapped in insect screening.

Finally, capillary breaks are important at the top of each concrete pier. When I built my SIP kitchen addition I used a sturdy membrane as the capillary break at each pier (in the photo below, you can see the bright blue membrane cap break between each 6-by-6 pressure-treated post and the concrete pier). 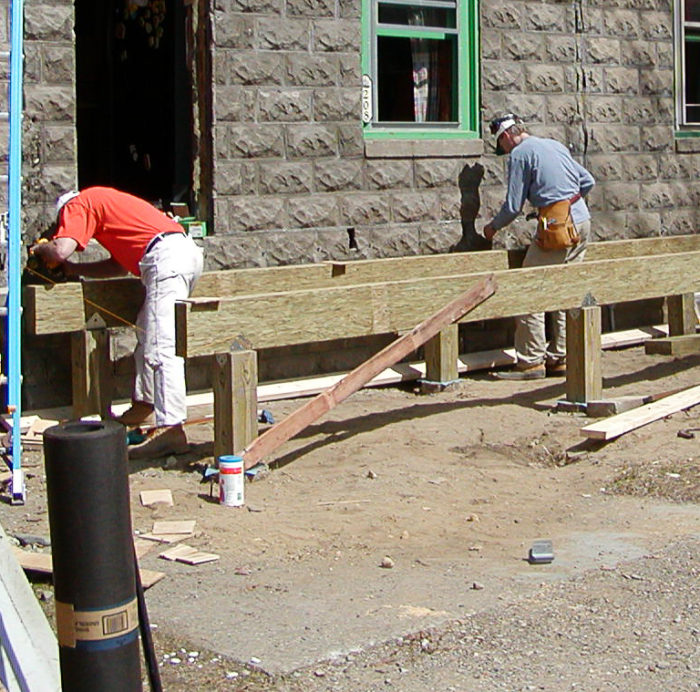