The Diminishing Returns of Adding Insulation

A look at the numbers behind this oft-heard expression

If you’re building a house and want to have a really good building enclosure, you need it to be airtight, handle moisture properly, and have a good amount of insulation. Ideally, you’d also consider the effects of solar radiation on the home, but for now let’s just focus on the insulation. What exactly is “a good amount” anyway?

If you’re a practical person, I’m sure you realize that life has a tendency to make you aware of certain limits. After the first few drinks in an evening, for example, further libations have less and less of an effect. Well, less and less of a positive effect anyway. Unfortunately, diminishing faculties obscure the diminishing returns, and you wake up the next day wondering how your head got in that vise. (Not that I know anything about that. I take all things in moderation, including moderation.)

The same is true with insulation. Below we’ll take a look at what happens as you keep increasing the R-value in a wall. If you just want to understand the concept of diminishing returns, you can skip ahead to the text below the graph. For the building science geeks out there, though, I need to tell how I generated the numbers for the graphs.

The equation to calculate heat flow over a heating season is Q = U x A x HDD x 24. The result is the total number of BTUs of heat that flow through the wall under those conditions. The only thing that varies in the graph below is the R-value.

A is the wall area, and I chose 1,000 square feet as a representative value. HDD is the number of heating degree days using a base temperature of 65°F, and, for four of the graphs below I chose a city in IECC climate zone 4, such as Portland, Oregon, Asheville, North Carolina, or Louisville, Kentucky.

Can Foam Insulation Be Too Thick?

It’s Not About Space Heating

For the other example I used Atlanta, which has 3,000 HDD. For all of the graphs, I divided the result of the calculation by 1 million and plotted MMBTU (million BTU) instead of having all those unwieldy zeroes on the axis.

OK, now we’ve got those details out of the way. Let’s see what it means.

Getting less and less from more and more

An uninsulated standard 2×4 wood-frame wall has an R-value of about 3, so our starting point of R-2 in the first graphs is close to that of an uninsulated wall.

If you can see what’s really happening here, you don’t need the next graph. The important effect here is that most of the reduction in heat flow happens early on. With each addition of R-2 to the insulation level, the reduction declines.

An easier way to see that is with the graph below. Here I’ve plotted only the reduction achieved for a given step of R-2. Once you get out to about R-14 or so, at least on the scale shown here, the additional insulation results in pretty small reductions in heat flow.

From this we can draw our first conclusion:

Where the curve is more vertical is where most of the action occurs. Once it starts flattening out, you get less and less from more and more. That’s what is meant by the term “diminishing returns.”

In fact, this whole exercise harkens back to my “Flat or Lumpy?” article, in which I wrote about the importance of not missing areas that need to be insulated and getting a uniform coverage. My friend Mike MacFarland helped make this connection for me last night when he texted, “This is why it’s so critically important to use building performance equipment to locate and fix all of those areas in homes where the vertical part of the graph exists.” Indeed!

The previous graph helps understand how important it is to fix uninsulated homes, but it could lead to the wrong lesson when it comes to designing new homes. If you’re designing a new home and trying to find out how much energy you might save by adding more insulation, you’ve got to choose a more reasonable starting point.

In Atlanta, for example, you’ve got to put a minimum of R-13 insulation in your above-grade exterior walls. Factoring in the effect of all that lower R-value wood in a standard 2×4 wall (with studs 16 inches on center), the whole-wall R-value is about R-11, so that’s our starting point.

If you’re framing with 2x4s, you could go with a higher density R-15 insulation and get a whole wall R-value of 13 in the same space. You could also build thicker walls or add exterior insulation or both, with the result of higher R-values. However you do it, we get a similar graph of cumulative heat flow reduction as our first graph above, shown in the graph below. 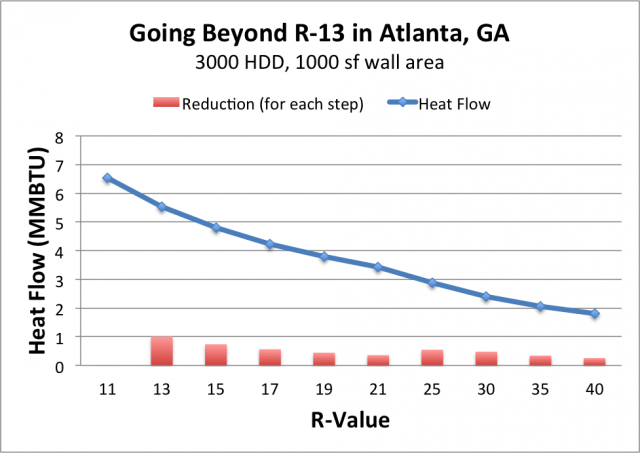 What if you were to insulate your walls to R-19 in the climate zone 4 cities I used for the first graph? When you put R-19 insulation in the cavities and mix in 2×6 framing that’s only R-7, the whole-wall R-value is about R-16, our starting point in this case. The same pattern as before holds in this case, as you can see in the graph below.

And the returns still diminish, as you can see in the stepwise reductions shown in the graph below. 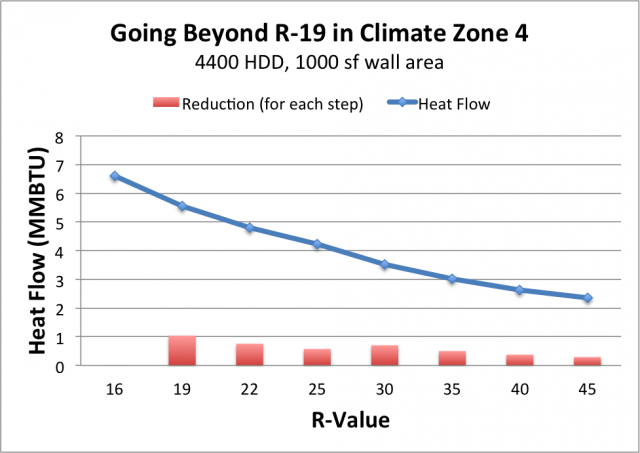 Too much is never enough

In my Mastering Building Science course, which begins on October 27, 2014, I’ll dive into these variables and show how you might decide what’s the optimal amount of insulation to use. You’ll also get my spreadsheets if you sign up.

Take heating system types, for example. The graphs above show the amount of heat moving through that 1,000-square-foot wall, but the amount of heat you pay for may be different from what’s flowing through the wall. If you’re heating with a furnace that’s 80% efficient, you’ll have to buy 25% more BTUs than you lose through the wall. If instead you use electric resistance heat, you buy the same number of BTUs you lose, but with a different fuel and at a different cost. All that and more factors into the decision.

I’ve had this topic on my list for a long time, and finally got spurred to write about it because of the debate over the Passive House program and the insulation levels required to meet the requirement for the annual space heating demand to be no higher than 4,750 BTU/sf, no matter what climate you’re in.

Martin Holladay, the Energy Nerd here at Green Building Advisor, had a great article about it last week: It’s Not About Space Heating. He reported on a recent presentation by Marc Rosenbaum, and the issue of the diminishing returns of adding insulation played a big role (although that term didn’t appear). Rosenbaum’s main point is that spending a lot of extra money on the building enclosure to chase those last BTUs is probably not the best way to go. Go read the article. And be sure to read Rosenbaum’s comment (#2), too.

So, what’s the answer?

Some people look at the graphs above, especially the second one, and conclude that it’s silly to go beyond the first few steps since you’ve already gotten most of the reduction you’re going to get. That is a mistake. First of all, you have to make sure you’re choosing the correct point for comparison. The first two graphs use a starting point of an uninsulated wall.

If you’re designing for new construction, you have to choose a starting point that is at least at the level required by your local code. As you can see in my R-13 and R-19 examples, the returns don’t diminish nearly as quickly when you start higher. That may sound odd, but it’s true. That doesn’t mean all those higher levels of insulation are cost-effective, though. You’ve got to do the calculations to find where your optimum is.

The bottom line is that although you can certainly put R-40 insulation under your slab or R-80 insulation in your walls, it may not be the smartest thing to do. Take a look at the bigger picture and see whether you might be better served by reducing the size of the home, finding ways to save on water heating, appliances, and plug loads, or investing in photovoltaics. Whether you’re trying to reduce power plant emissions or just save money, at a certain point, it becomes wiser to stop with the insulation and spend your money on the stuff that, dollar for dollar, will yield better results.