Is Cold Sheathing in Double-Wall Construction at Risk?

Insulation is good. More insulation is better (although at some point, more may not be cost-effective). It reduces the amount of heat a home loses in winter or gains in summer.

When you do it by making the walls thicker, you also change the ability of an assembly to deal with moisture because the sheathing stays colder in winter, an issue that painters discovered back in the early days of insulating homes when walls stayed wet and paint peeled off. With a 2×4 or 2×6 wall, dealing with the rain on the outside of the wall is usually enough to prevent problems (unless you’re in an extremely cold climate).

Going to thicker walls, though, especially double-stud wall construction with cavities that are 12 inches thick, makes vapor diffusion of interior moisture a bigger threat. Building Science Corporation (BSC) recently published the latest results from its study of a home in Massachusetts with double-stud walls and found a somewhat surprising result about cold sheathing getting wet.

The Return of the Vapor Diffusion Bogeyman

Getting Insulation Out of Your Walls and Ceilings

BSC has been working with home builder Carter Scott of Transformations, Inc. on this Building America research project. Scott builds superinsulated homes in Massachusetts (climate zone 5A) using double-stud wall construction. The house in this study is wired up with a lot of sensors to measure temperature, moisture content, and relative humidity in various places (indoors, outdoors, and within the walls). The photo below shows the sensors in one of the walls. You can look at the full BSC report to get all the details about them.

The BSC study used both cellulose insulation and open-cell spray polyurethane foam (ocSPF) insulation, and they monitored what happened to the OSB sheathing (Huber’s Zip System sheathing) over a three-year period on the south and north walls of the home. Further, they looked at two different thicknesses of ocSPF: 5.5 inches and 12 inches. The cellulose was 12 inches thick. (GBA reported on this research project in a November 2013 article called Monitoring Moisture Levels in Double-Stud Walls.)

In this article, I’m going to focus on a few key questions:

How wet does the sheathing get? 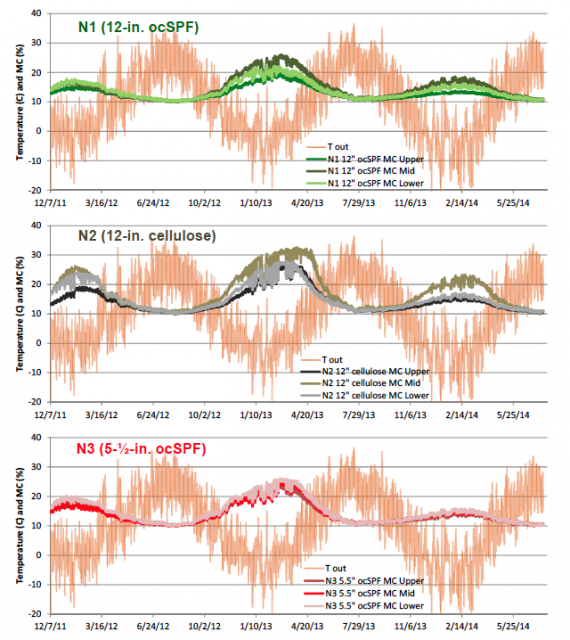 Notice that the two spray foam sections stay below 20% moisture content for all but a few months in the second winter. The sheathing next to the cellulose insulation goes above 20% in all three winters, at least in some places.

Clearly, though, the second winter showed the most potential for moisture problems. The moisture content of the OSB sheathing went above 20% for all three wall types. The good news is that by mid-summer, the moisture content was back down to about 10%.

The graphs above are for the north wall. The data from the south wall show the same basic pattern, but the moisture contents are all lower. The 12-inch-thick ocSPF, in fact, stayed below 20% all three winters. The 5.5-inch-thick ocSPF went slightly above 20%, and the cellulose section went up almost to 30%.

So, how did the walls get wet? And did the moisture cause problems?

Where does the water come from?

Water that gets into building assemblies can come from a variety of sources. It could be rain getting through bad window flashing or a roof leak. It could be ground water wicking up through the foundation and into the framing. It could also be from water vapor in the air. In this case, it’s the last of those.

The first winter was dry because no one was living in the home yet. By the second winter, there were occupants but the ventilation system wasn’t operating until mid-February. After they started ventilating (exhaust-only, two 30 cfm fans), the air dried out and by the third winter, the indoor air was dry again.

Those numbers correlate with well with the changes in moisture content in the OSB sheathing. And that raises an interesting question: Do you need to keep the indoor RH below 30% to keep the sheathing in double-stud wall construction from getting wet? That’s a bit on the low side.

When I asked Kohta Ueno, the author of the BSC report, about this, he said low relative humidities are typical in New England. “I have very seldom seen houses running 40% RH through the entire winter around here.” Most homes, he said, run at about 20-30% RH through the winter, and he considers 40-50% RH to be “crazy-dangerous levels in a New England/Zone 5 type of climate.”

Does the wetting cause any problems?

Another really cool part of this study was what they did after three years of collecting temperature and moisture data: They took the walls apart and inspected them for signs of rot, mold growth, or other problems.

The last three photos below show the disassembly. The first of them shows the north wall with siding and sheathing removed. You can see the three sections with different insulation. The second photo shows the sheathing from the south wall. They found no damage here and no evidence of mold or rot. The final photo shows the north wall sheathing. They found no indication of mold or rot here either, although they did see some rust on the nails.

The results were surprising because the moisture content of the sheathing had gone so high in the second winter. In Martin Holladay’s 2013 article on this double-stud wall research, Ueno is quoted as saying, “I don’t think it’s an issue. As Mark Bomberg says, ‘We measure the moisture content of wood during the winter but it rots during the summer.'”

When I spoke with him last week, though, he was a bit less sanguine about it. He told me the walls stayed wet long enough into spring that it was warm enough to grow mold. In the report’s conclusion, he wrote, “Based on the monitored data, calculations, and analysis, all three walls should have been at high risk of failure; the analytic tools used indicate that these walls should have failed.”

But taking the walls apart at the end of three years showed that they not only did not fail but were “essentially undamaged.” Ueno thinks it may be the borate added to cellulose that helped protect the sheathing in that wall. He proposes several hypotheses for the success of the spray foam walls, which had lower moisture content but still should have failed, but wrote in the report, “The protective mechanism of the ocSPF wall was not clear.”

In a Journal of Light Construction article on this study, Ueno told author Ted Cushman that Joe Lstiburek appears to be right. “Joe has said for years that building assemblies are more robust than we give them credit for. This is a solid demonstration of that fact.”

4/22/15 This just in: I spoke with Joe Lstiburek today, and he wants to make sure it’s clear to readers that he does not recommend this wall assembly. “I would never build that wall because I consider it too risky,” he said. This was a research project for BSC, not a building that incorporated their design. Details in next week’s blog.